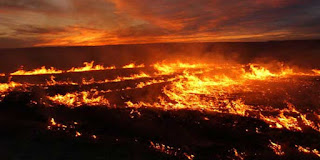 Gene Towne and I were working on revising a paper reviewing what is known about the effects of differences in the timing of burning on grasslands and grazers.

We had written "burning in late-April after the green vegetation has emerged, exacerbates smoke production and accompanying air pollution, which is at the forefront of the burning controversy."

This sentence seemed obvious to us. If you burn green biomass, it's smoky as heck.  Still, the sentence did not have a citation. Rightly so, it should have.

I spent some time going through papers to see if what we had observed empirically had basis in the literature.

After a few hours reading papers, it seems that the statement wasn't wrong, but I did make a mistake in not reading these papers sooner. Probably the best paper was Andrae and Merlet from 2001, which is frustrating because I apparently could have learned all of this 15 years ago.

4) It's interesting to read how stuff catches fire. When biomass starts to burn, the first step is the drying/distillation step. This releases water and volatiles. Then comes pyrolysis with "thermal cracking" of the molecules which produces char, tar, and volatiles. Here, stuff is breaking up, but not burning. As the biomass gets hotter, the tar and gas begin to oxidize, which produces the flame.
occurs. Once the volatiles have burned off, then the biomass begins to smolder (glowing fire) and many of the incomplete oxidation products are produced.

For us, we're likely to rewrite the sentence a bit to acknowledge the complexity of fire and smoke.

In all, when green grass is burned, it's nitrogen concentration is higher than senesced grass, which leads to greater production of NOx, which is a precursor to ozone production that causes health problems. Whether green grass has a lower combustion efficiency hasn't quite been resolved (Mebust and Cohen 2013). It should be lower with wetter biomass, but this apparently hasn't been definitively demonstrated. If so, then burning green vegetation is going to produce a lot more junk. 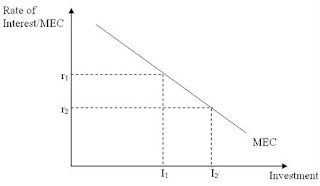 In economics, there are a number of theories on how entities invest. One of those is has to do with the relationship between the amount of investment and interest rates.

By analogy, when governments are deciding how allocate scare research dollars, similar economic decisions should be at play.

In reality, these decisions are nothing close to rational, in the economic sense.

For one, we cannot quantify the rate of return on investing research dollars. Comparing two proposals for funding, reviewers likely can estimate the rate of return. The equation is something like: # of publications x impact factor of likely journals**.

**This formula is likely discounted a bit for age. Old researchers are more likely to publish, but have a shorter lifetime return on investment. Funding young researchers before tenure makes it more likely they will be publishing in 10 years...

**If it was used, it would just favor the more prolific discipline. Publishing papers is not the likely goal for funding agencies, per se. Papers aren't bitcoins.

If we cannot use expected rates of returns on publications, then how do we assess worth?

This is the Achilles' heel of rational investing in science. We cannot find a common currency to evaluate the relative worth of research.

Without this, funding becomes irrational.

Until we have a concrete way to assess the value of research, either in terms of dollars, or social equity, or longevity, funding is likely to be irrational.