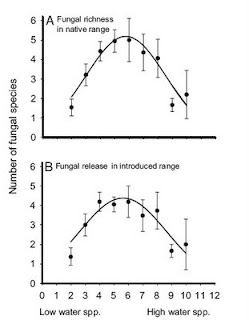 Two papers recently came out that both deserve mention as they are important steps to better understanding the nature of coexistence and dominance in plant communities.
For a long time, I've said that our limitation experiments are skewed in that we generally add nutrients and take away light. I can't say that anymore. Hautier et al. added nitrogen to experimental grassland communities. To half of the replicates, they supplemented light in the understory to test whether it was the reduction in light that caused species loss with eutrophication. Fertilized communities lost species as biomass increased and light penetration declined. But fertilized communities that had light added in the understory did not lose species. Pretty simple experiment that narrows in on a key mechanism underlying coexistence among species.
In the second paper, Blumenthal et al. compared pathogen loads on European species in Europe and North America. High-resource species had higher pathogen loads in their native range and experienced greater declines in pathogen load in North America. The enemy release hypothesis has always assumed that herbivores and pathogen strongly influence relative abundance at a given location, which has never been tested against competing hypotheses. That said, the data set reveals strong inferential patterns that are important irrespective of their potential ability to explain the dynamics of species introductions.
Hautier, Y., P. A. Niklaus, and A. Hector. 2009. Competition for Light Causes Plant Biodiversity Loss After Eutrophication. Science 324:636-638.
Blumenthal, D., C. E. Mitchell, P. Pysek, and V. Jarosik. 2009. Synergy between pathogen release and resource availability in plant invasion. Proceedings of the National Academy of Sciences of the United States of America 106:7899-7904.
Posted by JMC at 3:03 PM No comments: