Drought tolerance: grasses of the world

I'm not sure this one is going to work. I believe that if you measure something interesting and have strong contrasts, you should learn something interesting. I've had pretty crazy schemes work out in the past. Hopped on a plane and measured roots on three continents. Had people send me soil from across the US to look at nutrient limitation. Measured foliar 15N for a couple hundred species at Konza. Even looked at spectroscopic assays of 20,000 cow poop samples to infer continental scale patterns of forage quality.

Each time, we learned something interesting by having strong contrasts and measuring something interesting. But to start to understand global patterns of drought tolerance by growing 500 species of grass in the growth chamber in relatively tiny tubes? I'm just not sure this one is going to work.
Granted, what we're doing right now is just a pilot project and would be easier with the NSF Dimensions of Biodiversity grant funded. But, questions about the evolution and geographic distribution of drought tolerance are just too important not too try. At the heart of it, we just don't understand the traits that are associated with drought tolerance--what does a drought-tolerant plant consistently look like. In what climates are they most likely to be found. Are some lineages more likely to have evolved drought tolerance than others?
To begin to answer the question, USDA sent me seeds for 500 grass species from their seedbanks and I've serially germinated them over the past 2 months. After about a month, we measure a couple of gas exchange and morphological metrics on the leaves and then stop watering. When they stop conducting water (shut their stomata), we measure their water potential, which we call psi-crit.
A little over 100 species have hit their psi-crit so far. Here's probably the most interesting graph so far--drought tolerance (psi-crit) vs. the maximum width of the largest leaf on the plant. 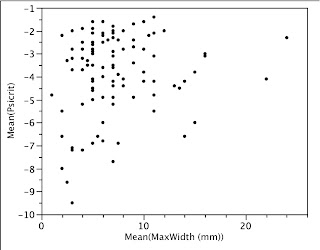 Of course, it doesn't take more than one species to prove something not impossible.

We still have a few species left to measure, of course.

What controls the maximum height of plants is relatively well understood. Plants can grow no taller than they can support themselves and than they can move water. Roughly every 10m of addition height requires xylem to resist an addition -1MPa of pressure. There are many other factors that could lead to selection for shorter plants, but tall plants need to be able to resist high negative pressures in their xylem.
Though we understand relatively well what controls the maximum height of trees, what controls maximum rooting depth is not well understood. If roots are moving water from their tips to the shoots, then similar constraints should apply to roots as stems. A root cannot go deeper than its xylem can resist the negative pressures of moving water that height. Even if it is belowground, the same physics apply.
But is there another constraint besides this? Is maximum rooting depth determined largely by hydraulics? If moving water was not a limitation, e.g. in wet places, what would constrain rooting depth? Or lateral extent for that matter.
I suspect that phloem and sucrose transport could be just as big a constraint on rooting depth/extent as hydraulics are aboveground. I'm not sure I understand the details on this, though. If a typical plant tried to produce a root 10m long, could it move enough sugar through its phloem to sustain the growth of the root tip as well as intermediate tissue? What about 100m? Some plants can apparently go this deep, but could any plant?
I have to admit, I'm not even sure what to begin measuring here. This summer, we're suppose to start doing root cross-sections on long grass roots, e.g. 2 m long, and look at the anatomical characteristics of xylem and phloem. Maybe this'll start to shed some light on what's hidden belowground.
Posted by JMC at 3:07 PM No comments: