Recent news releases have reported that the White House has called for federally financed research to be available to the public in a reasonable amount of time.

A number of proposals are being floated around.

The easiest? Have a federal fund that pays for open access.

Open access publication for a paper costs about $1000. Sometimes its more, but the government could establish a government rate, just like with hotels.

Cost for making everything available $25-40 million.

NSF and the community shouldn't settle for anything less.

It might be thought of as taking money away from research, but all economists tell you that you continue to invest until the returns on investment are negligible.

The amount of scientific resources this would free up is immense. The benefits of open access aside, scientists spend way too much time chasing journals that don't have fees to get things published.

If open access is a good thing to do, then it should be funded above current funding.

More on response of trees to drought 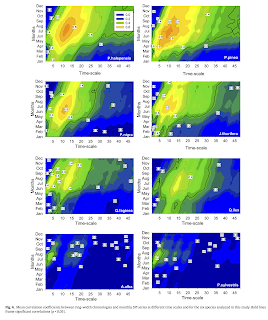 As a followup to a previous post, here are some earlier results on drought impacts on tree growth. The Vicente-Serrano paper had looked at the response of tree growth to droughts of different lengths globally. This one was just for Spain.

While less extensive, the summary figure is neater and looks at the timing of drought better.

Here they integrated precipitation over different lengths of time with different starting points.

Top to bottom is xeric to humid gradient.

All sites respond most mid-season precipitation, but integrated drought over the past ~10 months is most relevant for trees in xeric sites and only a few months for humid sites.

Drought in grasslands is typically visualized in the media with cracked-soil watering holes or dust clouds. Severe droughts might show emaciated cattle or even carcasses of the stricken.

Drought is more nuanced than that, though.

The consequences of there being too little grass are elementary. Animals starve. Too little drinkable water and animals dehydrate.

But what are the consequences of a drought when there is sufficient quantity of grass and still sufficient water? Is it even a drought?

At Konza, 2012 was under drought. Yet, because the density of grazers (here, bison) is relatively low, there was sufficient quantity of grass for them. So did they even notice there was a drought?

For four years, Gene Towne and I (mostly Gene) have been collected fecal material from Konza bison. The bison herd of ~300 are allowed to graze wherever they want over approximately 1000 ha. For the first three years, the seasonal cycle of dietary quality was pretty consistent. When temperatures warmed up in the spring, dietary quality peaked and then declined to maintenance levels by late July. Quality was relatively low until the next spring.

Rainfall through late June was fairly sufficient, but drought hit soon after. Over a 2-month period, just 50 mm of rain (2 inches) fell. It was dry and it was hot, with temperatures routinely hitting 37°C (100°F).

Visually, some of the grasses started growing again. It looked like a second spring. Bouteloua seemed to respond the most, covering the uplands in a thin coat of green.

The quality of their diet declined through the growing season like almost every other year. But, then in early August, it started to get better.

By the end of September protein concentrations were almost twice as high as normal. For them, it was June all over again.

We had never seen patterns like 2012 before and we still have a bit more to learn to flesh out the story.

We still have to analyze the fecals for dietary composition, so we don't know what plant species the bison were concentrating on.

I also haven't asked Gene for all the weight data yet, but the weights of bison calves were actually heavier than average last year.

I guess if a grassland isn't too crowded, droughts might not be so bad for grazers.

response to drought: how long?

Vicente-Serrano and authors examine data on plant productivity to determine the response time of plants to drought around the world.

I'm a bit awestruck at how much data went into this paper. 40 ANPP time series. 1800+ tree ring chronologies. NDVI for the whole world.

When they look at the patterns, the authors essentially quantify the time scale of response of vegetation to drought. In general, dry sites respond quick and a lot, mesic sites long and moderately, humid sites quick, but not much.

The reasons the authors give for these patterns are a bit phenomenologically adaptationist, but the patterns seem clear.

The legacy of drought is longest at intermediate aridity.

Nitrogen deposition: all loads are critical? 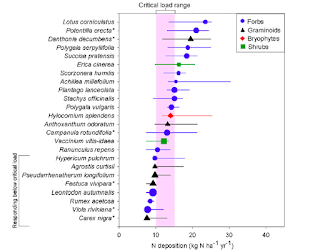 A recent paper by Payne et al. examine the response of grassland species to N deposition across Europe. The goal was to identify critical loads of N deposition for individual species.

The 15 kg ha-1 level was about right at the community level. At this level, communities really start to change. But individual species decline at much lower levels.

Their results suggest that any level of N deposition might negatively impact some species.

This isn't a paper that tests alternative hypotheses. They don't analyze covariates. They don't take into account past histories of N deposition (which might have been greater) or other factors that might be influencing species abundance.

"It also suggests that less overall ecological damage may result from new sources of reactive N in current high-N deposition regions, where a shift to a more pollution-tolerant community may have already occurred, rather than regions that currently receive low levels of pollution and are sensitive to even small increases in N deposition. Effective pollution control policy should focus on avoiding all new pollution sources in currently unpolluted regions"

Gary Lovett wrote a commentary on this for PNAS. The potential implications for policy at least here in the US are clear:

"Critical loads remain an important tool for assessing the impacts of atmospheric deposition on ecosystems, but the best use of this tool requires effective interplay between science and policy, including periodic reexaminations of the policy to incorporate the most recent scientific advances. In some cases, such as the Payne et al. paper (2), those advances may cause us to reconsider the fundamental concepts that underlie the policy."

The critical scientific question here is whether a critical load of N can be identified. If not, regulations would be necessary to reduce loading as much as possible, relative to the costs of doing so.

The open question here is whether all N deposition is bad. If anthropogenic N deposition were removed, what would happen to ecosystems? What would the consequences be?

That's a question few are addressing.

Lovett, G. M. 2013. Critical issues for critical loads. Proceedings of the National Academy of Sciences of the United States of America 110:808-809.