Genus of bison: Bos or Bison? 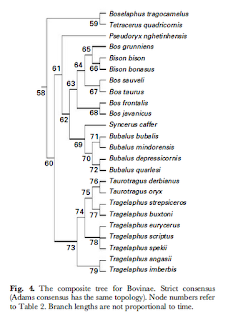 There has been some confusion for awhile over what scientific name to call bison. Is it Bison bison? Or  Bos bison? Bos is the genus that includes domestic cattle (Bos taurus) and a number of other Bos species. Recently, people have started to refer to bison as Bos bison? Why?

First, it's not because bison have interbred with cattle. Some bison have cattle genes from previous interbreeding, but that doesn't create revisions of the genera of species.

The potential revision comes from phylogenetic work. Linnaeus initially categorized bison as Bos (1758). In the interim, others elevated it to a level of a separate genus. In the late 1980's and early 1990's, scientists began to reconstruct the phylogeny of ruminants. When they looked at Bison and Bos species they found that species had been included under Bos were paraphyletic. The yak (Bos grunniens) was more closely related to bison species than other Bos species.

To maintain monophyly in classification, phylogeneticists are faced with three options: 1) rename Bison back to Bos, 2) change the genus of the yak to Bison or a separate genus (Poephagus), or 3) live with paraphyly.

For now, Bos bison and Bison bison are considered synonyms. The most correct scientific classification is likely Bos bison, which doesn't denigrate the animals, just orders the books better. Yet, the IUCN report even states that for political reasons (conservation by governments), it might be better to keep bison as Bison.
Posted by JMC at 8:08 AM No comments:

Phenology and sensitivity to climate II

Update on results.  Had to learn how to use R to the data tables. Somewhere on the order of a quarter million calculations were going into sorting through all the combinations of climate, years, species...I wasn't doing that in excel by hand.

After looking at ~50 species, species that flower earlier have lower minimum temperatures required for flowering. Not too surprising. It's colder in March than May. 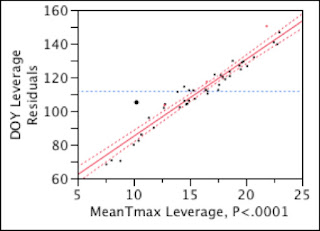 More interesting is that species that flowered earlier were more sensitive to climate variability--required fewer days at threshold temperature to flower. 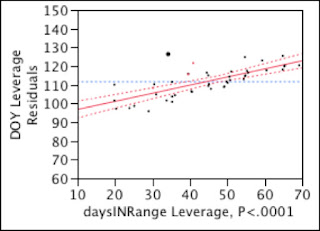 In short, it seems like climate variability (absent of changes in means) early in the season will have a greater consequence for phenology than later in the season.

In operational terms, a warm spell followed by a cold snap early in the season would disproportionately cause greater damage to plant reproduction than later in the season.

Phenology and sensitivity to climate

One of the strongest separations of species in grasslands is their phenology. Most guide books separate grasses and forbs, forbs by flowering color, and then timing of flowering. From a global change perspective, phenologies become important in understanding how climate will alter ecosystem function. Early-flowering species appear to respond more to variation in climate than later-flowering species.

The analyses of these patterns are still pretty basic. One question that struck me is whether early-flowering species are more responsive to variation in climate, or just have a lower temperature threshold for responding.

The first step in partitioning this is to begin to quantify these patterns and compare. On a preliminary basis, I used the Gates' first flowering data that was collected in the 1930's-1950's. I then adapted the critical climate period approach to examine the climate correlates with phenology. In short the technique allows testing whether temperatures over different windows before the event each year are the best predictors across years of the timing of the event. For example, I could test whether the first flowering date is best predicted by temperatures 10 days preceding flowering, 15 days, 20 days...etc.

From a predictive standpoint, the approach sees to work pretty well. For example, Catalpa flowering was best predicted by a 40-d window of temperature that averaged 21.9°C. 10-days after this window, it flowered. Outside of one year, flowering for catalpa can be predicted pretty well. 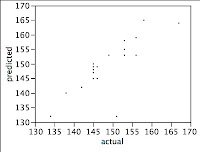 When I do this for a handful of species (grasses, forbs, and trees), a couple of patterns emerge. 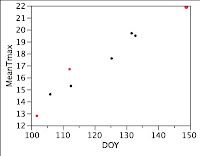 First, species that flower later in the growing season (day of year = DOY) have higher temperature requirements that must be met. Early-season species need periods with daily maximum temperatures to average 13°C, while later species (like Catalpa) require periods over 20°C. [red dots are trees]. 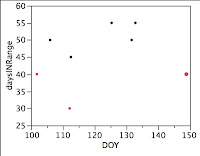 Second, species that flower earlier integrate over similar periods of time as late-flowering species. In general, about 45 days.

In general, I think the relative critical climate period technique holds potential for quantifying differences in climate sensitivity for phenological events. The interesting part of this work lies in relating these patterns back to the ecology of the species more than anything. For example, what is it about a species that lets it respond to climate so fast? I would guess species like dandelions (Taraxacum) that sit in rosettes have few developmental barriers to flowering. Primordia are there waiting. Other, more determinate species, need to produce a series of leaves before they initiate flowering.