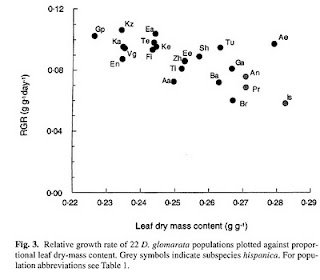 There is still some contention about whether leaf tissue density (mass per unit volume) leaf dry matter content (LDMC; dry mass per unit wet mass) are equivalent and whether past work has shown LDMC to be ecologically relevant, no less more relevant than specific leaf area (SLA).

I've looked through the literature pretty hard. Here's about all I can find:


1. LDMC and leaf tissue density should be positively correlated and there has been some excellent work investigating the underlying causes of variation in LDMC that are relevant for understanding leaf tissue density (Vile et al. 2005, Roderick et al. 1999, Shipley 1995). I still haven't found the perfect test of the two methods, but they should be pretty strongly related.
2. LDMC can predict plant strategies (Vendramini et al. 2002, Wilson et al. 1999). LDMC does a better job than SLA in predicting CSR placement for example.
3. LDMC can predict relative growth rates within species (Ryser and Aeschlimann 1999) and digestibility (Pontes et al. 2007, Ansquer et al. 2009, Duru et al. 2008).
4. LDMC was not correlated with competitive effect or response (Liancourt et al. 2009).
5. LDMC correlated better with soil fertility and sheep grazing intensity than SLA in Norwegian alpine ecosystems (Rusch et al.2009). [Note I still haven't read this paper--it's on order.]

The tyranny of dominance 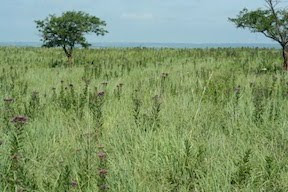 But do grasses evolve to be dominant? Or rare? Dominance might be a common condition for a few species, but how transient is dominance? Or rarity?

This is a topic that easily belies one's inner model of how the world works. More often than not, it's one's view of human society that paints one's ecological canvas. But that's a topic for another day.

Although unstated, there are likely two competing intellectual frameworks at play with discussing dominant species. On the one hand, it is possible that some species have evolved to be dominant and others rare. There are light-demanding canopy trees and there are shade-tolerant understory herbs.  It is the role of the latter to always be underneath.

On the other hand, dominance and rarity are context specific. All species dominate somewhere and at some time. It all depends on the environmental context. If there are species that are dominating it is only because of the prevailing conditions.

Let's look at Konza Prairie. 86 species of grass. Only a few are considered dominants: Andropogon gerardii, Schizachyrium scoparium, Sorghastrum nutans are the big three. Maybe Panicum virgatum if one is feeling inclusive. But what about the other 82? Do they not dominate because they cannot dominate an area, or because they dominate grasslands under conditions that are not prevalent at Konza.

For example, only a portion of Konza is grazed and most of that area not too heavily. All of Konza's Big 4 grasses are less abundant in areas that are grazed than ungrazed. If Konza were grazed more heavily, one would likely assume another set of species were dominants. Bromus arvensis is likely one of those. It is 10,000 times more abundant in grazed than ungrazed areas. It "dominates" grazing lawn areas.

Along these lines, Gene Towne went and calculated that almost half of Konza's grasses have been found to be abundant in at least one of Konza's ~300 10 m2 permanent plots over the past 15 years. The other half? Some of them, such as Elymus virginicus, dominate in wooded areas which just aren't sampled at Konza. Some of them dominate outside of Konza. For example, Panicum coloratum is a dominant in the southwest mesquite woodlands. Poa arida is not common at all at Konza, but Konza is really at its southern range limit. Go to Alberta to find vast stretches of it. Some of the other Konza-rare species are annuals and would likely be a lot more abundant if the ground was pounded by more hooves or we had recently had a major drought.

In all, there's probably too much Berkeley in me to believe that some species are inherently dominant. It seems like, at least for grasses, each species likely dominates somewhere some of the time. That said, it would help to hear a bit more about the assumptions that underlie the concept of dominance. I could accept that grasses would be tyrannical to one another in their quest for resources and reproduction. The idea that some grasses are inherently more likely to dominate than others is a tyranny of thought I am probably not willing to accept yet.
Posted by JMC at 5:11 AM No comments: