John Weaver is considered the father of grassland ecology in North America. Most likely because of his views on succession, quite often he is a forgotten father. Yet, his work on grasslands spanned over 50 years. His work is notable in many ways, but his careful observation of grasslands before, during, and after the Great Drought of the 1930's taught us an immense amount about how grasslands respond and recover to drought.

If you read Weaver's work, there are some hidden lessons about how plant communities respond to drought. Weaver talked about how during the Great Drought, the shortgrass spread hundreds of miles to the east into the mixed grass region and the mixed grass hundreds of miles into the tallgrass. Yet, reading his observations, most of the expansion of xeric grasslands did not occur from migration of individual species, but expansion of local populations. Eventually, when the drought broke the humid grasslands marched back westward, but again through expansion of local populations or dormant propagules. In many cases, big bluestem (Andropogon gerardii) recovered from crowns that remained viable for almost a decade.

These findings from Weaver raises an interesting set of questions about the functional diversity of grasslands and how different grasslands would respond to drought. Essentially, when droughts hit or mean precipitation levels change, how much does ecosystem function depend on expansion of local populations vs. immigration of species?


Given a number of assumptions, extrapolating out, almost all grasslands should on average have a broad range of drought tolerance. If precipitation declines, drought-tolerant species on average should be able to expand locally and maintain ecosystem function.

There are still a number of details to work out, but Weaver's description of grasslands seems to hold at the global scale. Functional diversity in grasslands represents the typical high spatial variability in resource availability and the climatic variability typical of grasslands. 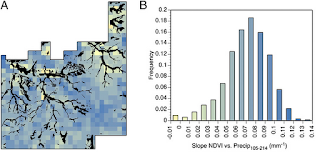 Maps of Konza showing the slopes of the relationships between NDVI and precipitation from DOY 105–214, Also shown are the univariate distributions of these slopes. Colors of slopes on maps correspond to colors in histograms.

Last July, I added an entry on the role of the timing of heat waves and drought for ANPP at Konza. This was recently published in PNAS. In review, the work takes a look at how the timing of interannual variation in temperature and precipitation affect grass production.

As much as the specific results and the proviso that the timing of climate variability can matter as much its magnitude, the technique should become important in examining other long-term records. Any long-term record that is repeated at roughly the same time every year can be used. We've applied it to ANPP, streamflow, bison weight gain, carbon flux, and flowering so far.

I think another area where the technique has potential is with remote sensing data. In the paper, Andrew Elmore applied the technique to NDVI data from MODIS and Adam Skibbe overlaid data on elevation and woody cover. The unique results is we could now look at the spatial pattern of sensitivity to the climate variability. We saw that pixels with woody species and low-elevation sites showed low sensitivity to variation in mid-season precipitation. Essentially vegetation and sites that could tap into deep water had lower sensitivity to precipitation variability.

In this particular case we didn't test whether different areas showed different timings of sensitivity, but with longer remote sensing records spread over a larger spatial area, it certainly could be tried. We could ask how climate sensitivity varies with latitude or aspect or between major vegetation types.

I think the critical climate period approach has its limitations, but will generate a number of insights in the near future. As we apply the technique to different aspects of ecosystem functioning we'll get a better understanding of the multiple connections between climate and organisms.

Arguing the importance of argument

We were in a small hut in South Africa when Noah and I began to discuss sampling schemes. The tradeoffs were clear. For a given amount of effort, one can distribute replicates among or within. Sample lots of sites with little replication within each site or fewer sites with replication. The one approach allows for the greatest generality, but provides no ability to distinguish sites. The other generates certainty in the estimate for a site, but sacrifices certainty in the pattern among sites.

Given the tradeoff, what to do? Sample as many sites as possible? Sample few sites well? Or some intermediate.

And so started the argument. There was no animosity, just a comparison of ideas. It took a long time. Kendra and Val lost patience, went for a game drive, and came back to find us still at it.

Kendra and Val saw lions and hyenas. We generated the “2 or 20” rule for sampling—either sample 2 sites well replicated or 20 sites with no replication, never in between. It doesn't matter who took what side. The point was to work through the idea.

Argument that was the progenitor to science. It has shaped science at every step.

Many great arguments have punctuated the sciences. Huxley argued for Darwin and famously responded to Wilberforce that “I would rather be the offspring of two apes than be a man and afraid to face the truth.”

Over a hundred years later, Johanson and Leakey debated the origins of humans based on fossil evidence:

“In the heat of debate, Dr. Johanson held up a chart showing his Lucy version of the human family tree. Next to it was a blank space in which he invited Mr. Leakey to draw his version. Feeling trapped, Mr. Leakey finally took a pen and placed a large X through Dr. Johanson’s tree. “Well, what would you draw in its place?” Dr. Johanson asked. “A question mark,” said Mr. Leakey, and so he did with a bold flourish.”--NYT

Though there are still examples of argument in ecology, it has almost disappeared. Our national meetings are series of talks, virtually none of which are paired with opposing view points. Plenary talks are small talks writ large. Never counterpoints. Departmental and lunchtime seminars typically follow the 5-50-5 model: 5 minutes introduction, 50 minutes of talk, 5 minutes of questions.

The review of papers is a last vestige of argument. A paper generates a thesis. Reviewers respond to the thesis and often provide antitheses (or reject presuppositions). The editor acts as judge to evaluate arguments.

But even this standard can become diluted with some journals only looking for essentially factual errors as the basis for rejection. Argument is to happen after publication, not before. A valid model, as long as argument takes place.

The marginalization of argument handicaps the science. Argument sharpens ideas. And only the comparison of thesis and antithesis can generate synthesis. Many syntheses are more inclusive than synthetic. It is important to aggregate data, findings, and ideas, but argument is required to compare ideas.

There are dangers to argument. Outcomes can be perceived as a loss for one of the participants. But in the best debates, ideas are compared not people. Poor arguments can become personal. As the saying goes, “play the ball, not the man”. There is a danger in debate that performance can outweigh argument. This is why the dialectic is favored over rhetoric. Rhetoric is persuasion that can rely on emotion, dialectic only logic.

Ultimately, we argue to sharpen ideas. Can ideas be sharp without argument? Yes. But argument is the best way to sharpen any idea.

How do we promote argument?

Read papers with another person. Flip a coin and have one person argue the paper’s main point and another a counterpoint. For example, Cease et al. just published in Science that “heavy livestock grazing and consequent steppe degradation in the Eurasian grassland promote outbreaks of this locust by reducing plant protein content.” Would this conclusion stand up to argument? Can equally parsimonious alternative explanations be generated? Which is weakest part of their thesis and the most important to further test? A good argument is necessary for this.

Another way to foster argument is to have talks follow the 5 – 25 – 30 model. Instead of 50 minutes of slides, have only 25. No one can absorb 50 minutes of information. Once, when information was rare, an hour talk was an important part of the dissemination. But now? If the talk were on YouTube, would we all sit and watch it together? YouTube can replace presentations, but it can’t replace discussions. Take 30 minutes to argue and discuss points.

Scientific argument has to happen every day. If it only happens during the review process, it is often too late. I reviewed a hundred papers over the past 3 years. Papers written without argument as part of the process are clear. Papers get written without theses or identification of antitheses. Hypotheses take the up-down-stays the same form if they are there at all. They don’t identify or discuss competing hypotheses. Critics of important theories can state that “scientists haven’t proved their point”, when any arguer knows that true question lies in whether they have identified the most parsimonious explanation.

Argument can’t be constant and anywhere. But we can promote it in a balanced manner at multiple levels within out discipline.

Does argument ultimately promote our science? One can always argue the contrary, but even if they were successful, I think that would be Q.E.D.

Back to the hut in Kruger. Not long after, Noah had his first PNAS paper. The results were derived from  98 sites. No replication at any site.
Posted by JMC at 7:32 PM 1 comment: