By restricting our own freedom, we gain collective power. It's a tenet of larger society, but also scientific society.

For some the restriction is in the form of Arabidopsis. Zea for others. Populus, Lotus, Medicago...the list of model organisms that are used to answer fundamental questions about the genetics of plants goes on.

What would a model species set for grasses look like? It would have to be large enough to cover the major clades (~10), but restricted enough that researchers could measure standardized metrics on every species. Probably about 100 species. For grasses, they should come from different continents, span multiple origins of C3 and C4, and cover a wide range of environmental tolerances. Seed should be readily accessible. Most likely seed sets would have to be collected by a central agency for distribution to willing researchers. A central database would be needed to store all the data for other researchers to use.

Once that happened, an individual researcher that was interested in the cold tolerance of grasses could grow up all 100 species, measure their cold tolerance, and then examine the evolutionary patterns of cold tolerance. The next researcher that wanted to examine stomatal density could do the same, and then would be able to compare it with cold tolerance. Root anatomy, mycorrhizal dependence, genome size, carbonic anhydrase activity, flowering phenology, drought tolerance...the database would build. Each time we would learn more about multivariate trait selection in ways that no one lab could do.

Why doesn't this exist? Hard to say. Part of it is probably some small group just deciding which 100 species to use. Would it be perfect and cover all the potential evolutionary questions? No, but there are researchers that are asking these questions anyways, so they might as well be using the same species. Plus, there always could be a second species set identified to fill the gaps in the first for a second round of measurement.

Why not just keep a database and let researchers work on whatever species they felt best allowed them to examine specific ecological and evolutionary contrasts? Never enough overlap. Brassicaceae has 3700 species and even the Arabidopsis genus has 9 species. But everyone works on thaliana even if other crucifers might be better to answer some questions.

Once the scientific community agrees to encourage the restriction of freedom of inquiry into plant evolution a little more, a large amount of collective power will be realized. How long should it take? A few informed individuals who are not afraid to make political sausage would need to be in the same room for about 2 days. How long will it take to get people in a room for 2 days? Hopefully within a year or two.
Posted by JMC at 5:10 AM No comments: 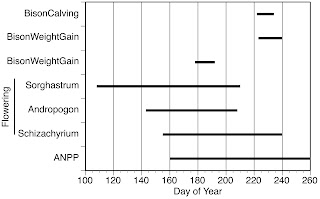 Critical climate periods for precipitation for ANPP, flowering of 3 grass species, bison weight gain, and the calving rate of adult females the following year.
Some ranchers around here know that "a dry June is money in the bank". Supposedly when precipitation in June is low, cattle gain more weight. More cow means more money. I haven't heard it too much around here and I had never seen data to support it (until the work on bison weight gain at Konza), but it exemplifies the climate-nutrition-performance cascade and is a cautionary lesson in understanding climate change.

The performance of grazers--their weight gain and calving rate--is dependent on both the quantity and quality of the grass they eat. The interannual determinants of quantity seem fairly straightforward (for some sites). Quality is less so. Quality encompasses a lot of things, but primarily is protein. And protein is nitrogen.

We've used the critical climate period approach to begin to tease some of this out at Konza. The figure above shows a broad CCP for ANPP--rain that falls in June or September still is important for determining growing season biomass. The three C4 grass species have different, but overlapping, CCP's. Each is about 80 d. In contrast, bison weight gain and calving rate seems to respond to variation in precipitation for just relatively short periods. One in late June, early July. The other mid- to late August. Calving rate depends on just mid- to late August precipitation.

Between climate and bison performance is protein. And the controls on protein we're still figuring out.

Until we do, we'll have a hard time understanding the dynamics of grazers, no less their fate in a world where climate has changed.
Posted by JMC at 7:49 PM No comments: 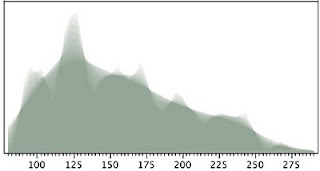 Distribution of first flowering dates for 265 Konza grassland species (as of mid-May).
There are some ecological analyses that can only be done by analyzing every species in a flora. Statistical inference aside, if we are to understand ecological sorting and community assembly, we need whole-flora analyses.

For example, we've slowly been accumulating data on first flowering for the Konza flora. For each species,  the day of year it first begins to flower is recorded. We're about half-way to having dates for the entire grassland flora. It's a bit biased now as we're still collecting data this year, but that's why this is on a blog...

There seems like there might be pretty strong selection pressures to flower at times when 1) environmental stress is low and 2) there is little competition for pollinators. I'm not sure if there would be selection against synchrony in flowering time for anemophilous species, but we that would be something to test, too. In this case, deciding what the null model is, is the hardest part.

I like the idea of whole-flora analyses. It's a lot of work though.
Posted by JMC at 2:51 PM No comments: 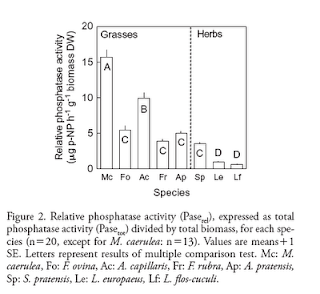 Why the sorting though? What traits would have been selected for in low-N vs. low-P soils? Fujita et al. have a new paper coming out in Oikos that I think provides some good data to separate species and shed light on selection when nutrients are limiting. It's long been known that plants can produce phosphatases to increase P availability. Fujita et al. show that low-P species have higher rates of phosphatase production.

With the experiment examining plant growth and activity at a range of N:P supplies, the research has the potential to help understand not only differences in grassland communities but also the response of grasslands to N deposition. Fertilization with N increased phosphatase activity in ways that should further increase the abundance of low-P species.

The authors do a good job for their eight species in linking plant stoichiometry, plant growth, and resource availability, which might ultimately serve as a key trait in understanding selection for success when nutrients are limiting, as well as the functioning of grasslands.