One of the central tenets of "functional ecology" is that the performance of plants in a an environment is due to their functional traits. Yet, which traits to measure, how they are measured, and how the plants are grown are sources of endless debate, sometimes paralyzingly so.

It seems inviolable that species must be compared after having been grown under common conditions. This means growing plants either in field plots or pots. I've written a bit about autogenic plasticity involved with field plots and how feedbacks to resource availability affect expressed traits. One of the most enduring criticisms of plants grown in pots is the size of the pots. No pot is ever too big, and almost any pot can be too small.

The bias in results that comes from restriction of roots has been termed "the pot effect". I trace it back to Curtis and Wang's first ecological meta-analysis on elevated CO2. The authors wrote in their abstract "We found no consistent evidence for photosynthetic acclimation to CO2 enrichment except in trees grown in pots <0.5 l (-36%)". The take-home from the paper was that little pots bias the results.

My guess is that would be the wrong conclusion. For that study, photosynthesis acclimates when plants are nutrient-limited. Plants in small pots become nutrient-limited faster than those in the field or in big pots. It's not the pot size at all. But which is more representative of the real world?

Quite likely the pot. As I've shown at Cedar Creek, small plants in big plots at low density are not very nutrient limited and have the traits associated with the high-nutrient strategy. Plants of the same species in more mature plots at higher density resemble more what we seen in small pots--the low-water or low-nutrient strategy.

One could argue pretty easily that the pot effect is essential to mimicking the real world where resources limit plant growth. One could argue too that small pots cause artifacts, but it would take some careful logic chains for the argument to be convincing.

In the mean time, try small plots. They generate water or nutrient limitation faster. And increase your replication if you're tight on space.
Posted by JMC at 9:44 PM 2 comments:

Does this person feel playful or irritated?
If you said irritated, you aren't as likely to raise the collective intelligence of a group.

It is a truism that the smartest of all of us is not smarter than all of us, but how much smarter all of us are depends on how we work together. Ecology lives and breathes by group efforts these days--very rarely are papers ever published by a single author. Yet, we have paid scant attention to how to put these groups together and what makes them successful.

A paper last fall in Science actually did experiments to test what factors made groups collectively the most intelligent. The authors assembled a large number of working groups and had them together try to solve a series of complex tasks.

What made some groups the most successful?

It wasn't necessarily how smart the smartest person in the group was. Instead, collective intelligence correlated best with "with the average social sensitivity of group members, the equality in distribution of conversational turn-taking, and the proportion of females in the group" state the authors.

Not all the lessons transfer directly to scientific working groups. The tests the authors used were generic for which there might not always be specialized knowledge--like playing checkers. Deciding sampling strategies or statistical analyses is going to depend on having experts a lot more than checkers does. That said, there seem to be some pretty good lessons from the study. Take turns. Listen to others equally. Have women involved--or at least men who behave like women in the sense they are "socially sensitive". Not sure what that is? Take this test. Didn't score well? Then it's probably even more important to have women involved I would guess. 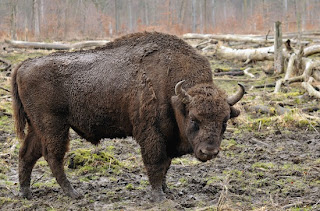 Bison bonasus. They eat a lot of trees. Image from Michael Gäbler, Wikimedia.
The diets of grazers and browsers have not been easy to determine. To determine the diets of animals you have to 1) spend a lot of time watching, 2) use exclosures, 3) grab the food somewhere in the digestive system and try to recognize it. None of these approaches work that well.

Recently Kowalczyk and others published a paper that sequenced plant DNA present in fecal material from Bison bonasus in Bialowieza Forest in Poland. Essentially, a lot of plant DNA makes it through the digestive tract and it can be sequenced to quantitatively assess diet. This all but renders options 1, 2, and 3 vestigial. My guess is that we are going to see a lot of this technique in the near future. It's too powerful and the results are too fascinating.

The specifics of what the authors learned from the technique is interesting. Bison bonasus diet consists of a lot of trees and herbs. And the tree species are not economically important, which makes them great forest gardeners. Compared to Bison bison, Bison bonasus might as well be Alces alces.

How to infer importance

Quantifying the relative importance of ecological factors in determining the distribution and abundance of species is one of the most critical endeavors to understand the assembly of communities and ultimately the evolution of different species. Yet, how do we do this?

One approach is experiments. Another is gradient analyses. Each has its pluses and minuses. Yet, is there a way to infer importance without manipulations or gradients. If I go to a single place and determine who is rare and who is abundant, does that offer insight?

Let's take drought. Drought has long thought to structure grasslands. We know that it can from the Great Drought. But how important is drought in determining the assembly of extant communities?

One way is to compare a trait that should confer advantage during drought to the relative abundance of species currently. But what are the interpretations of the relationships. Let's say there is a positive relationship between the drought tolerance trait and abundance. Probably good evidence that drought structures the community since those species that do not have the trait are less abundant.

But what if there is no relationship? Does this mean drought is not important since it doesn't confer any net advantage? Or is it equally important as some other factor, since one might expect the drought tolerance trait to penalize plants in wet times? And what if physiologically drought-tolerant species are less abundant than intolerant ones? Is drought not important? Or does drought serve as a disturbance and structure the community in a different way.

In all, using an inferential approach to interpret patterns depends strongly on our mental model of how different factors structure communities. As much as being able to measure the right traits, linking these mental models to testable hypotheses is one of the most limiting steps.

In short, we need to spend more time clarifying our concepts before testing the importance of factors.
Posted by JMC at 2:25 PM No comments: