Forensics on research and non-commutative property of science 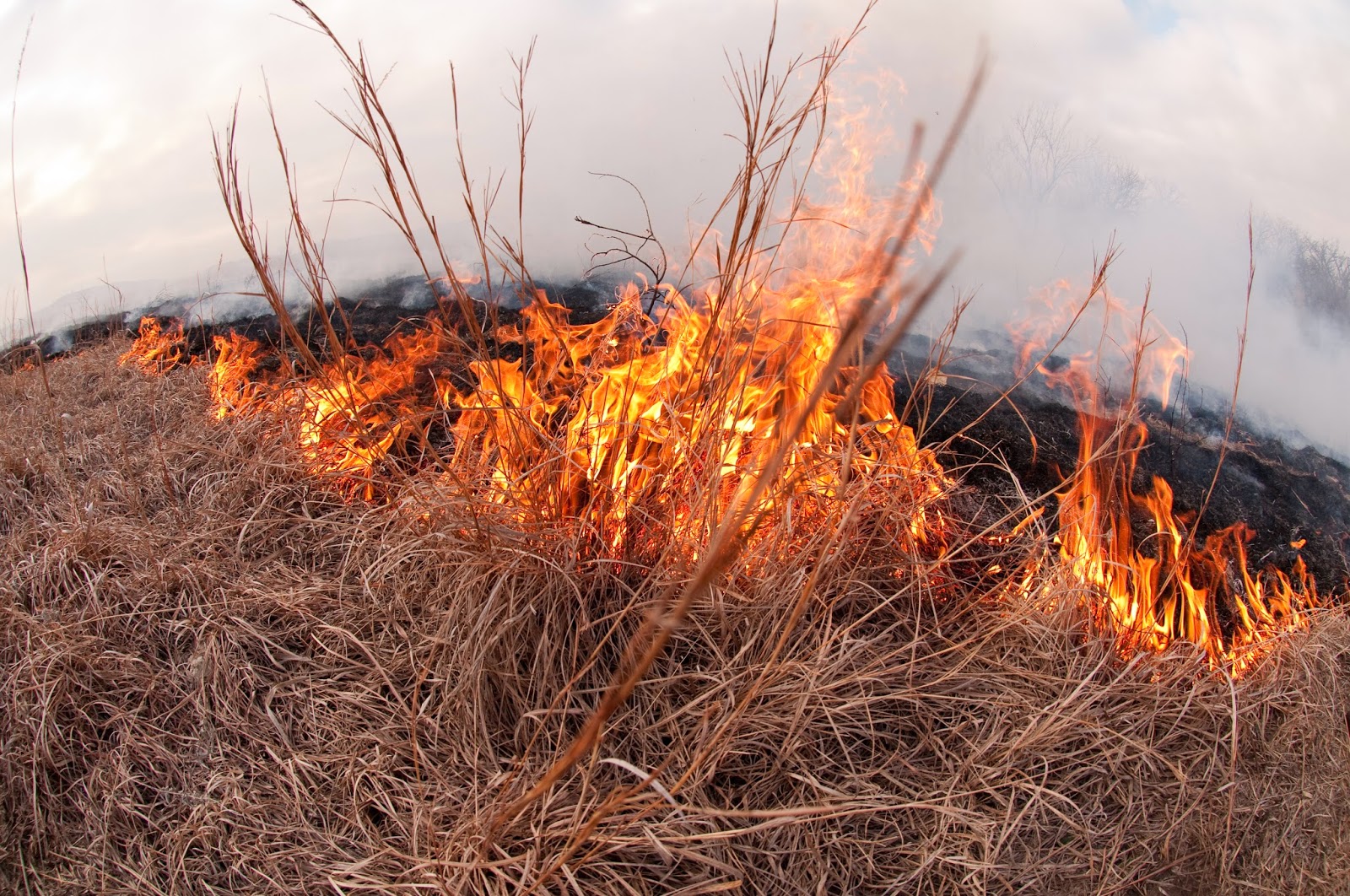 We learn early on that when adding numbers, order doesn't matter.

Any time new data are collected, the whole of the evidence needs to be reexamined with no favor given to hypotheses that were favored in the past.

Yet, science (and its application) is often not commutative. Order does matter.

The bar for disproving an idea is higher than proving it initially.

Gene Towne and I just published a new study on burning of grasslands. The study examines 20 years of data from watersheds burned at different times of year--fall, winter, and late spring. It's the most comprehensive study of the importance of the season of burning in North American grasslands.

In short, the research shows that burning grasslands in the fall or winter compared to the late spring has little effect on grasses productivity, while favoring cool-season grasses and forbs. The details of the study can be found here or here.

To the rest of society, it's an important study because it has implications for how much of the last remaining tallgrass prairie is managed. This affects the grasslands that support a million or so cattle each year. But it also affects the millions of people that are downwind of the region when the grasslands burn.

Currently, in the Flint Hills, ranchers (and conservationists) burn prairie frequently every year. Based on recommendations, burning is concentrated in the late spring. When that happens, air quality standards are often exceeded in major cities downwind of the fires.

What is interesting here is to dig into where the recommendations came from. Scientific forensics.

When you examine the research upon which the recommendations are based, almost all of the research was conducted over 40 years ago. Moreover, it seems evident that the findings on when to burn are fairly equivocal.

For example, the research from the 1960's and early 70's showed that plant biomass was found to be lower when grasslands were burned in early spring vs. late spring. Yet, these means were generated for just one small experimental plot per treatment.

The old data also showed that when grasslands were burned earlier soil moisture was lower, which presumably caused the lower productivity. Yet, in the particular study conducted in the 1960's, soil moisture data are reported as being lower in January in the early-season burn than the late-spring burn, two months before the burning has occurred. This result was likely a site effect.

Another major line of evidence to recommend late-spring burning was long-term data on cattle weight gain. The data on weight gain showed a trend of 6% greater steer weight gain from May to September over 16 years when burning on average on April 10 vs. March 20. Yet, as with other data, the weight gain of steers was again measured in just one pasture with no control for site differences that might be confounded with treatments. As for the data collected, although the weight gain of steers was significantly higher in burned than unburned pastures across 16 years, there was no significant difference in monthly weight gain with timing of burning (P > 0.1).

Based on the data circa 1970, if you had to choose a time to burn, late spring made sense. Yet, when all the past and current evidence are taken together, there is little evidence to support burning exclusively in the late spring.

Burning Flint Hills grasslands earlier is unlikely to have any major negative consequence for grass or cattle production, and may actually be beneficial (see the paper).

Unfortunately, more than likely, unlodging the idea that burning in late spring is necessary will be a lot harder than lodging it in the first place.

Unlike elementary addition, order is likely to matter here.
Posted by JMC at 2:17 PM 1 comment:

More bison data are rolling in off the field scale. At Konza, we set up a scale for bison to walk over and weigh themselves. So far, they seem to be obliging.

As to the data, first, are examples of a 3-year-old cow (red) and a 2-year-old cow (blue). These are the individuals that we've had the most data for. You can see that over ~60 d they've put on almost 100 kg. As far as we know, neither of these animals have had a calf this year. Although the sample size is small here, it looks like weight gain has started to level off here.


With 90 calves tagged last year, we have a lot more data for this year's yearlings. If I standardize for individual variation in weight among animals (for those animals that have enough data to look at trajectories), this is the general trajectory. More or less linear increases in weight over the past 60 d. About 80kg of weight gain.

We still have some kinks to work out of the system. For example, we are just getting it to the point where we can remotely harvest the data. Also, we need to tag all the animals out there, which should happen this fall.

For everything we know about seasonal patterns of dietary quality, weight gain should be leveling off right about now.

This technique is going to be pretty important in order to understand seasonal weight dynamics and eventually how climate change will affect grazers in grasslands. For example, we see that bison in the north reach greater size than those in the south. Is this because they have a longer period of weight gain, or gain more weight at a given time? As it gets warmer, what mechanism will climate affect our grazers?

How much weight different animals will gain in the next month is going to be super interesting.

[Note: the average yearling mass as of July 12 is approximately 245 kg. If you look at the 2013 Oikos paper, average yearling mass in the October roundups ranged among years from 234.1–281.6 kg. That means, if this was a typical year the animals would gain just another 20 kg, but they might put on another 35 kg.]
Posted by JMC at 6:03 AM No comments:

The trajectory of nitrogen in grasslands

Plant N concentrations might seem like another esoteric ratio, but they are the key to a number of ecosystem services. In grasslands, they determine the nutritional quality of grass for grazers, how much C plants take up, as well as how fast dead grass material decomposes. And grass that doesn't decompose fast is more likely to fuel burns later.

Whether plant N concentrations have been increasing or decreasing in grasslands is one of the greatest unknowns for modern ecosystem ecologists.

For example, Kendra's previous work had shown that N concentrations had declined by 25% in Kansas grasslands over the past 75 years. That study relied on plants collected for herbaria in Kansas over the past century.

Despite this single line of evidence, could grass N concentrations have actually been increasing?

N deposition rates have been increasing, for example. When N deposition is high enough, it's enough to eutrophy the grasslands with a cascade of effects.

To answer this question, we examined the N concentrations of grasses collected over 25 years at Konza Prairie. The grasses come from a single watershed under the same burn regime (annual burning) with no grazing during this time.

Now what trajectory the plants would take was uncertain. When grasses were first measured CO2 concentrations were 343 ppm. By 2010, they were 390 ppm. 14% higher.

Was that enough added CO2 to pick up a signal?

The quick answer was no. There were no significant declines in N concentrations (or 15N:14N ratios for that matter).

The grasslands was really similar to what it was like in 1982**.

**The Nature Conservancy's Joe Fargione's response to this was "Conservation works!" Essentially, we could hold a grassland pretty similar to what it was before.

Given the differences in results, now the rectification begins. The herbarium data suggest declines in N availability and plant N concentrations. The Konza data suggests no significant declines in either.

Unknown at this point.

One thing is clear, though. Neither study supports eutrophication of the Kansas grasslands. Despite elevated N deposition, there is no indication of greater N availability.

Looking forward, the future of the grasslands is still uncertain for so many reasons.

For those grasslands that are preserved, whether N availability, plant N concentrations, and forage quality will decline is a question that only further monitoring and testing will be able to answer.