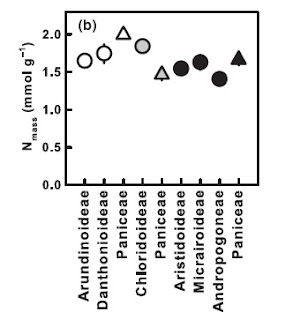 
Turns out, probably not much. Taylor et al. (2010) used a phylogenetically structured screening experiment to measure a number of morphological and physiological traits of grasses. In doing so, they could compare C3 and C4 species controlling for phylogeny. The research upholds the notion that C4 photosynthesis confers greater water use efficiency to plants. Yet, after controlling for phylogenetic relationships, there were no differences between C3 and C4 species in their foliar nitrogen concentrations.


By no means the last word on the topic. For example, they only measured ~30 species. Yet, the authors have provided the best experiment to date to address the question and evidence to the contrary will have to be weighed against some strong evidence regarding the ecological consequences of the evolution of C4 photosynthesis.