What to grow after the tree of life? 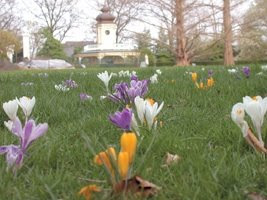 (crocuses at the Missouri Botanical Garden)
I had a fun conversation with Peter Raven of the Missouri Botanical Garden the other day. In essence, the topic that we discussed is what happens after the tree of life has been constructed? Today, thousands of researchers are working with a primary goal to reconstruct the phylogenetic relationships among organisms. But what happens after the tree is largely reconstructed? Yes, the tree of life will never entirely be reconstructed. One can argue that we can work on finer and finer branches, for example, trying to understand relationships among populations.
Yet, I can't help but look at the tree and begin to ask why. Not why we are reconstructing it, but why it is shaped the way it is. What ecological forces might have been behind so many of the radiations? For example, we know about 10% of the world's flora either use the C4 or CAM photosynthetic pathways. Broadly speaking, these pathways are an evolutionary response to low atmospheric CO2 concentrations. These species are not just adapted to low CO2, nor have the other species not been influenced by low CO2, but what about the other 90% of the world's species? How many are a result of selection for success in shade? Or competition for nutrients? Or the ability to tolerate drought? Moreover, can we begin to compare the regions of the world and better understand the biogeography of species? Sure, we can see who is where, but do we know why?
Evolutionary ecology is more than microevolutionary examination of processes that affect selection. There are broad questions about the evolution of the world's that cannot be answered by small-scale manipulations. One of the hurdles we need to get over is bias against what before have been called screening experiments. Hundreds of species are grown in common conditions and their traits measured to better understand the fundamental differences among species. These experiments are not trivial, but it seems clear that if we are going to answer these broad questions about the evolution of the world's flora, we need to screen more species. Not tens of species, but tens of thousands. Imagine a single greenhouse with all 10,000 of the world's grass species growing side by side. As far as I know, the largest ecological screening project measuring ecological traits of plant species included 640 species. After that, few experiments measured a hundred.
So what do we grow after the tree of life? If you ask me, it would be a garden.
Posted by JMC at 8:00 AM No comments: 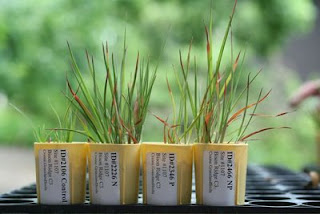 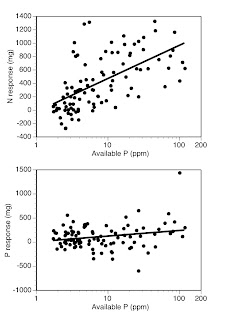 Another good review out. This time on shade tolerance. Valladares and Niinemets reviewed competing hypotheses underlying shade tolerance, focusing mainly on carbon gain and stress-tolerance hypotheses, as well as sections on acclimation to variation in light and ontogenetic changes. The authors do a good job of capturing the two major contrasting aspects of performance (carbon gain vs. loss) and it is important to incorporate ontogeny explicitly. Their figure demonstrating inverse relationships between drought and shade tolerance is an important one.

Comparing their work with RSWP, it is important to emphasize potential carbon losses that can come from disturbance as well as stress. Also, it seems like understanding of the ontogeny of shade tolerance is better served by beginning to understand how large plants can grow at a given light level, rather than comparing RGR’s at a given light level.

In all, a good, well-timed review.

I recently had the chance to read "Mechanisms of plant survival and mortality during drought: why do some plants survive while others succumb to drought?", which is a Tansley review in New Phytologist by Nate McDowell and others. One thing I really liked about their paper was the dichotomy between two potential strategies for coping with drought. The anisohydry strategy has plants experiencing lower leaf water potential as soils dry, but maintaining photosynthesis and transpiration throughout the drought. These plants are typical "low-water" species with all the anatomical traits that resist cavitation. The other strategy is to avoid drought through stomatal closure, maintaining more constant leaf water potentials. This is termed an isohydric strategy.
The latter strategy is interesting in that "drought-avoidance" is usually considered to be associated with little ability to withstand drought causing plants to die back or complete a generation until drought is relieved. Instead of the succulent strategy, where plants store water, the isohydry strategy requires plants to store carbon.
The paper is intriguing and I have a few questions about the generality of the isohydry strategy. Here are two:
1) It isn't clear that many species with low psi-crit's store a lot of C to endure drought. For example, I can't think of many herbaceous grassland species that use stored carbon to maintain a plant after leaves have closed their stomata.
2) After plants close their stomata, as soils continue to dry, plant water still comes under increasing tension, unless plants can hydraulically isolate themselves from the soil. The authors allude to this, but I'm not sure I understand how viable a strategy it is to close your stomates and wait for rain. Are plants more likely to run out of carbon before they cavitate?
A lot of plants have big carbon stores that we don't know when they are used. This might explain some of those patterns.
Good job to the authors on the paper. It'll be interesting to see the ideas developed more and the hypotheses tested in other systems.
Posted by JMC at 8:59 PM 1 comment:

In May, 2009, Princeton University Press will be publishing my book, Resource Strategies of Wild Plants. I thought this would be a good site to talk about issues raised in the book and discuss new finding that impact our understanding of the evolution and ecology of plants. For example, there are likely going to be aspects of the book that I haven't thought through that well, which deserve further development. In addition, as new research is published, our understanding of plants will change, and this deserves discussion, too.
Posted by JMC at 9:23 PM No comments: