How to taxonomically structure comparisons

For a recent grant, we proposed to measure aspects of the nitrogen and water economy of 30 species at Konza. The novelty of the proposed research was in measuring both water- and N-related traits for a wide variety of species, and then test how well they explain the abundance of the species in a native grassland.

One point that came up was how to frame the research. Part of our framing was that the results should help us understand the evolution of plant strategies and selection forces on species. Reviewers seemed to disagree.

Another said, “It seems to me that the work in this project will yield much in the way of an understanding of the influence of resource availability in the evolution of land plants, since gaining such insights would really require a more extensive phylogenetic and perhaps phylobiogeographic sort of approach.”

This is something I still do not understand. How many species does one have to measure to be able to infer selection pressures and evolutionary tradeoffs? Ironically, we had initially proposed to measure 100 species, but were encouraged to measured fewer species. 30 is not enough? Shouldn’t 2 well-contrasted species be sufficient to provide some inference? Most of the initial work on C4 photosynthesis compared 4 species. Granted the work is still being refined, but isn’t 30 a good start? Also, why would 30 species be enough to test ecological processes, but not evolutionary?

I think the standards here have less to do with the science, than the scientist.

The current review is immaterial—the panel summarized that “The placement of this research in evolutionary context was undeveloped but will not affect the quality and novelty of the project outcome.” Yet, the gap in our scientific process is clear in the lack of anabolic comments being paired with the catabolic ones. Experimental designs to test for evolutionary patterns seem to require I-know-it-when-I-see-it tests. Constructively, we need some resolution on standardizing designs. I’ve pushed before for a standard species set, but we also need resolution on some key questions outside of any standardized set.

If there is one question I'd like to see answered, it's "how many species need to be measured and how should they be related?"

I don't expect one answer to this, but if we are serious about wanting to understand the evolution of ecological traits, we have to make the bar visible, rather than always place it just above our leaps. 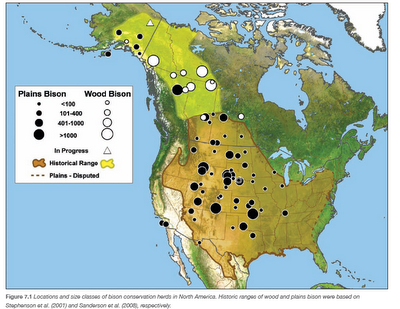 Locations and size classes of bison conservation herd in North America. Historic ranges shown, too. From Gates et al. 2010 IUCN report on bison.
Before European settlement, bison were distributed across North America. From the Atlantic coast almost to the Pacific and from northern Mexico to the Arctic Ocean. But where would have been the best place to be a bison?

There might not be an easy answer to the best metric for determining where the best place was to be a bison. Especially since we can't go back in time. Yet, bison have been reestablished across North America, which gives us some ability to begin to compare populations.

For bison, as with any animal, fecundity is the ultimate metric of fitness. It is almost axiomatic that when we compare individuals, the best metric of fitness is the number of offspring that an animal or population has. Yet, fecundity is density dependent. Fecund populations become dense, which lowers their fecundity. Population density could serve as another metric, depending on how important disease or predation become in limiting population size.

Systematic comparisons of the geographic ecology of bison have not been attempted. Yet, here's an interesting comparison. The latest IUCN report on bison "American Bison: Status Survey and Conservation Guidelines 2010" included a graph on the weights of bison at Wind Cave in South Dakota.  Weights were averaged for males and females by age. Wind Cave bison are considered some of the purest Plains bison and western South Dakota and its short grasses is thought of as prime bison habitat.
By comparison, Konza Prairie in Kansas is tallgrass. And tallgrass is sourgrass to some--not the best habitat for bison. The calving rates of bison at Konza can be pretty low. In some years only 50% of the adult female bison calve, which might not indicate the best nutrition.

Yet, with the data from Wind Cave, we can compare the weights of bison at Wind Cave and Konza. Based on what we know of the habitats and the calving rates, we might expect that Konza bison would weigh less than Wind Cave bison. 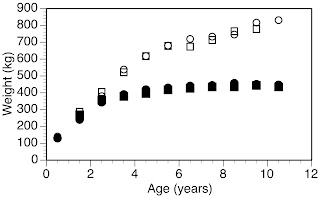 Closed symbols are females. Open symbols males. Circles are Konza. Squares are Wind Cave.
The two sites are right on top of one another.
Either the two sites are equally good for bison or the weight of animals isn't the best metric for habitat quality.
Posted by JMC at 3:38 PM No comments: