Best use of bootstrapping, ever: the flavor network. 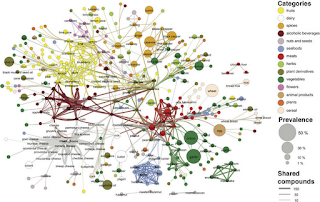 Not too often, a paper comes out that generates so much insight and is presented so elegantly that it induces jealousy.


Ahn et al. published a paper in Scientific Reports (Nature's version of PLOS), "Flavor network and the principles of food pairing". Essentially, the paper mined on-line recipe databases to generate differences in ingredient use and flavor-space among cuisines.


Each figure in the paper has so much that is interesting. At the center of a giant multivariate analysis of flavor is what Kendra called the "triangle of happiness": cocoa, beer, and coffee. At the center of that: katsuobushi--dried, shaved bonito tuna. It must be amazing. Liver by the way shares little in the way of flavors with anything else (thankfully).


The authors also use bootstrapping to see which are the most unique ingredients in different cuisine's recipes. North America clearly stands out for its desserts. Take away: milk, butter, cocoa, vanilla, cream, cream cheese, egg, peanut butter, and strawberries and our recipes are pretty similar to elsewhere in the world. Essentially it's our ice creams and cheese cakes that make us stand out.


So much about the food of the world, jammed into one paper. Blue cheese and chocolate share 73 flavor compounds? Throw away line.


This is an amazing food paper, yet I can't help think about why we can't do this for plants. Substitute regional flora for cuisines,  functional groups for ingredients, and functional traits for flavors and it would be once-in-a-century paper. Yet, you look at the underlying data for this paper and realize that paper is a century away. 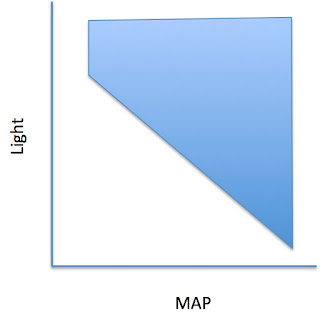 Shade, drought, and nutrient scarcity are three resource stresses that constrain vegetation globally. Each of these are influenced by state factors as well as other more proximal controls on ecosystem function.

At least theoretically. We've actually never tested these ideas, which constrains our ability to explain and predict a lot about how ecosystems work.

Take shade. Plants produce leaves, which creates shade beneath them. Yet, the amount of shade in different stands varies tremendously. Theoretically, sites that are more limited by water should be able to produce less leaf area, leaving more light to the understory and removing a constraint on the growth of understory vegetation.

Despite decades of light measurements and hemispherical photographs of canopies, the data has never been synthesized to generate a global map of shade that can be analyzed in terms of determinants. Do dry ecosystems have a lower potential for producing shade than wet ecosystems? And how does that vary with temperature? Do forests in colder regions cast less shade, all other things equal?

Part of this echoes Peter Grubb's assertion that higher fertility sites should generate more shade and have more slow-growing shade-tolerant species, which still hasn't been tested directly as far as I can tell.

Ecosystems are not entirely deterministic from state factors and there are more proximal "interactive controls" like disturbance that are co-influenced by the vegetation. The probability of fire depends on what species are present as well as state factors like macroclimate.

I've been trying to diagram this. Terry in his ecosystem book used a flow-control diagram to map the relative influences of state factors, interactive controls, and other controls on processes. 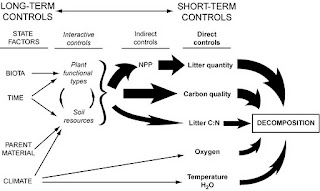 I've tried this approach for generating limitation and my diagrams come out looking like spaghetti. Or fettuccine. Some type of long, linear pasta. At least not fusilli thankfully.

The best I can come up with is a ternary diagram. In short, we want to show that drought, shade, and nutrient scarcity are all inversely related. And that a given global change factor promotes one or two stresses over the other. Precipitation promotes shade and nutrient scarcity over drought stress. Warmer temperatures promote drought and shade over nutrient scarcity. Disturbances reduce resource stress overall (inset).

There are dependencies for the diagram, e.g. chronic vs. catastrophic fire or scarcity of N vs. P.

Still I think this encapsulates the concepts we have about how global change factors alter limitation.

Mapping out other specific state factors is still a challenge. I get more spaghetti diagrams when I do this. Well, diagrams that look like I spilled dried spaghetti.
Posted by JMC at 7:15 AM No comments:

The proximal should precede the distal

When it comes to explaining patterns associated with the ecology of plants, a simple dictum should apply: the proximal should precede the distal.

I've been working with a few others to try to make this point with plant functional traits and ecological patterns for a review that Science green-lighted. In short, when looking to explain ecological phenomena, the mechanisms explored should be the closest to the mechanisms that generate the pattern.

If drought is thought to cause mortality in a system and one is trying to understand which plants would survive drought the best, measure whole-plant drought tolerance first. Then begin to examine more distal underlying traits. Don't start measuring traits like SLA or screening genes until drought tolerance has been quantified.

Pratt et al. 2008 show a good example of the approach. The authors grew up a series of chaparral species from seed and monitored their performance over a dry summer. Those species that could withstand low water potentials the best, suffered lower mortality.

The same approach applies for a range of other cases, but each time it is important to be clear about what the processes are that are hypothesized to generate the patterns of interest and then measure the functional traits that are most closely related to them.

There has been over-reliance on general leaf traits, for example, that has generated a lot of frustration (and frustratingly low explanatory power). In contrast, when ecologists directly measure the ability of plants to tolerate low resource availability, for example, ecological patterns are explained better.

Defining the pattern of interest, generating hypotheses about their causes, and clearly linking form and function is a heck of a lot harder than going out and measuring SLA.

Ultimately, when the proximal precedes the distal, more explanation is generated.

We'll see how we do making the case for the proximal in this review.