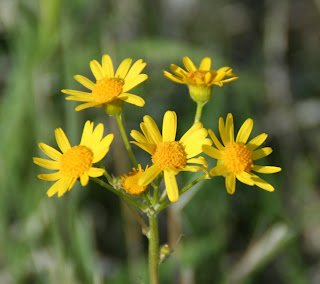 Packera plattensis, which was found first flowering on April 13 in 2010.

The timing of flowering is a critical component of the ecology of plants. Flowering during environmentally stressful times or when other plants that utilize the same pollinators can lower a plant’s fecundity if not lead to its extirpation from an ecosystem. As such, the timing of flowering should be under strong selection pressure and be an important component of community assembly.


The patterns at Konza are interesting. More on those later. The unexpected find was comparing the patterns with two other predominantly grassland flora. The first was from Chinnor, Oxfordshire. The second, Fargo, ND. 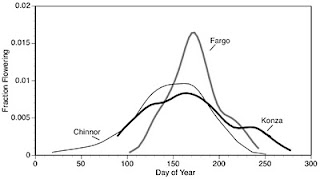 The y-axis is the fraction of each flora flowering on a given day. x-axis is day of year.


Two things pop out. Relative to Konza, the Chinnor flora has an early tail of species, but not a late tail. Is this because species phenology are all shifted earlier, so that the same species would flower ~50 d earlier there? Or is it just a suite of species that flower earlier are found at Chinnor, but  late-flowering species are not?


And relative to Konza, the Fargo phenology is much more compressed. Again, though, why? Does Fargo not have early- and late- flowering species, or are the phenology of individual species compressed.


Turns out we can begin to answer that and the mechanisms that underly the differences between the pairs differ.


Here are the relationships between FFD between the pairs of sites. Dotted line is 1:1. 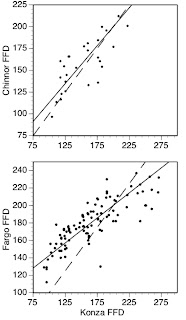 Species common to Chinnor and Konza flower on roughly the same day. Hence, one would suspect that the differences in curves between the two sites are due to novel types of species at each site. Yet for Konza and Fargo, early flowering species flower later at Fargo, and late-flowering species flower earlier. Phenology gets compressed for individual species.
Theoretically, I'm still getting up to speed, but comparisons between flora just haven't been done like this. Mid-domain theories are prevalent to test, but each site would support the idea of a mid-domain peak. What's more interesting is why sites differ. Right now, hypotheses about functional novelty/plugging of holes in niche space vs. functional stretching/compression are pretty interesting ones to test here. Flowering is interesting to think about, but the really interesting comparisons (at least for me) will come with comparing functional traits associated with resources, not reproduction.
Posted by JMC at 8:55 PM No comments: