The first of a few notes on temperature sensitivity 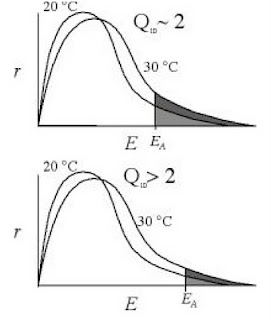 Probability (r) curves for the energy of collisions between a substrate and an enzyme at 20 °C and 30 °C. Shown are differences in activation energy (Ea) and Q10 required for reaction for a labile substrate (upper figure) and a recalcitrant substrate (lower figure).

Globally, soils contain about twice as much carbon as found in the atmosphere and three times as much found in vegetation. The fate of organic carbon stored in the terrestrial biosphere depends in large part depends on the temperature sensitivity of microbial decomposition. Currently, there is still debate over the relative sensitivity of different carbon pools to increases in temperature. Modelers have largely punted on the issue, assuming that respiration doubles with every 10°C increase in temperature (Q10 = 2).

Decomposition is complex, but proximally decomposition is an enzymatic process. As such, at least short-term responses to temperature changes should be governed by chemical laws. The degree to which they actually do is still up in the air. The Arrhenius equation describes the relationship between the rate of reaction (k), the activation energy of a reaction (Ea) and temperature (T)

where R is the gas constant and A is the frequency factor that is specific to each reaction and represents how many collisions between reactants have the correct orientation for reaction. The Arrhenius equation can be used to determine the temperature sensitivity of reactions as well as the fundamental chemical principle that the temperature sensitivity of any given reaction will be proportional to the net activation energy of the reaction.

Mathematically, from the Arrhenius equation, Q10 increases with increasing Ea. For example, at an Ea of 51 kJ mol-1, the Q10 of a reaction between 20 and 30 °C is 2, while at 81 kJ mol-1 the Q10 is 3. The reason for this is derived from molecular collision theory. In brief, at a given temperature, only a small number of the collisions between an enzyme and a substrate will be energetic enough for a reaction to occur, as described by the Maxwell-Boltzmann distribution (see figure above). As temperature increases, the number of collisions increases negligibly, but the fraction of collisions with sufficient energy increases significantly, leading to an increase in reaction rate. The ratio of the number of collisions of sufficient energy at two temperatures is the temperature sensitivity of the reaction. And based on teh Maxwell-Boltzman distributions, we can see that this ratio is much higher for higher Ea's.

The Arrhenius equation is a foundational principle for understanding temperature sensitivity. Later, I'll show recent work just now being published in Nature Geoscience that tests whether the temperature sensitivity of microbial decomposition to short-term increases in temperature follows the Arrhenius equation well or whether other factors might be more important. If it does, predicting temperature responses and the fate of terrestrial carbon pools just got a lot easier.
Posted by JMC at 2:09 PM No comments: 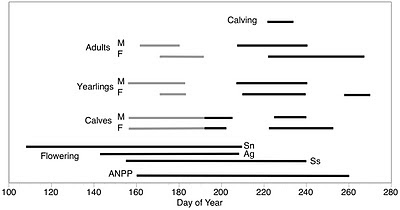 Critical climate periods for ANPP, flowering of three grasses, weight gain of calves, yearlings, and adults, as well as calving rates the following year for Konza. Gray bars indicate a negative effect of precipitation on the process, black positive.
If you look at the development of climate change research in grasslands, there have been two main stages. Climate Change 1.0 was trying to understand the importance of changes in growing season precipitation on ecosystem dynamics. Wet years are compared to dry years. Experiments that test climate change in 1.0 modify total precipitation.

Climate Change 3.0 is nothing new conceptually. But in practice, 3.0 is. Training our models to predict when precipitation falls can be more important than how much falls for humid grasslands. Training ecologists to start to examine this will be probably be harder.
Posted by JMC at 9:27 PM No comments: