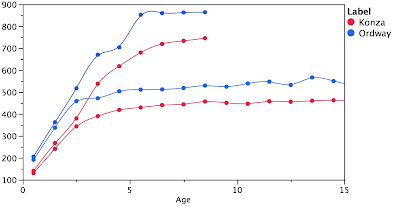 Weight of female (lower) and male (upper) bison at Konza Prairie and Ordway with age.
The performance of bison—how much weight they gain, how many calves are produced—is the ultimate expression of the functioning of North American grasslands. If we can compare the performance of bison in different grasslands, we have a window in the functioning of the grassland. Interannual patterns of weight gain show responses to climate variation. Average weights of animals give general indices to the provision of the quantity and quality of grass produced. Yet, no one has ever compared the performance of bison across grasslands in North America.
We're getting pretty close to doing that. For any one site, we can fit a growth curve to the weights of animals as they age. There are a number of growth curves that are used for these purposes, but a good one is a generalized Michaelis-Menten equation:

where W0 is the birth weight, Wf is the asymptotic weight, K is the age at which animals are half their asymptotic weight, c is a constant describing the shape of the curve, and t is time in years.
If you fit the weights of bison with age with this equation, for each herd you can extract essentially how heavy cows and bulls get, as well as a rate of maturity...or half-maturity as K would represent.
Right now, we have data on weight gain for about six bison herds. There are about 10 herds in the US that have weight data from roundups.
So far, we see a few basic things about bison. On average, males level off at about 75% greater weights than females (855 vs. 484 kg). It also takes them about 1.5 y longer to reach half their maximal weight.
We also see that some bison herds are heavier than others. For example, mature bison in Ordway Prairie in South Dakota are 50-100 kg heavier than mature bison from Konza. That's a lot of bison. Is it a fluke? Unlikely. Over 90% of Ordway adult cows produce calves. At Konza, it's only about 60%.
There must be a big difference in the grass between Konza and Ordway.  Because their bison growth curves are quite different.
Posted by JMC at 8:00 PM 2 comments:

In general, we have little understanding of how communities are assembled and the types of interactions that long-term generate evolutionary pressures, extinctions, and radiations. I'm pretty sure that whole-flora analyses are going to be keys to helping us understand these complex systems and there are precious few datasets on the scale necessary to do this.


With that in mind, here's the latest Konza phenology data by functional group. This is through Sept 1. The x-axis is day of year of first flowering for a species. Based on n = 408 species, which represents about 80% of the herbaceous grassland flora for Konza. We'll probably get another 10-20 species flowering before the year is up.

The y-axis is probability of flowering per day over the year for species of each functional group based on a "smooth" fit of the distribution data. Probabilities are standardized across functional groups. I broke out the Cyperaceae because it was the Carex that flowered early, not any C3 grasses. The C3 grasses that flower late in the year are generally woodland grasses.
This is terribly fascinating, though I'm not sure what the story is yet. For example, why are there C3 forbs that flower in August, but not any C3 grasses? And why are there C4 grasses that begin flowering in March, but not any C4 forbs?
There certainly is an long-term competitive interactions that sort communities and drive selection. It's almost likely a rock-paper-scissors story. If rock (C4 grasses) then no scissors (C3 grasses), but if paper (grazers) then there are less rocks, so can have knife (C3 forbs).
The C4 forbs are probably the most interesting story. If high temperatures favor C4 over C3, then why are there so many C3 forbs that are active during the hottest months rather than C4 forbs. Konza's C4 forbs are mostly Chamaesyche (Euphorbiaceae) and Amaranthus. Often they are prostrate forbs and/or weedy species keying in on disturbed areas. The C3 forbs that flower during this time are species like Salvia. Are there C4 forbs that fall into the same niches as these C3 forbs. Is there evolutionary constraint here that allows all the mid- to late-summer C3 forbs to persist?
As we generate more large-scale trait datasets, more of these patterns should come clear.
Posted by JMC at 7:32 PM No comments: 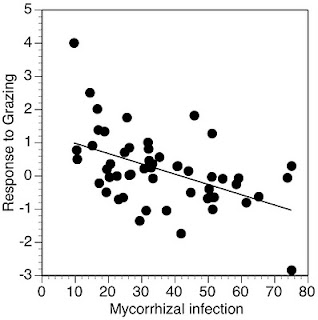 Relationship between mycorrhizal infection rates and the log-transformed response of species abundance to grazing.
The structuring of plant communities is complex. There are a myriad of proximal and distal factors that can influence the abundance of species. The role of mycorrhizal fungi in structuring grassland communities has always been opaque. In temperate grasslands, many of the species are dependent on arbuscular mycorrhizal fungi, yet many non-mycorrhizal species are found throughout the grasslands. Whether these non-mycorrhizal species tap unique pools or even are facilitated by the mycorrhizal species is really unknown.
Over a decade ago, Wilson and Hartnett (1998) quantified the dependence of ~100 grassland species on mycorrhizal fungi. There had never been a screening study like it. Nor has there been one since. Their work largely compared different functional groups, with the conclusion that C4 grasses are the most dependent on mycorrhizal fungi and legumes the least. The work implied that success at Konza would be dependent on the ability to utilize mycorrhizal fungi, but this was never quantified.
Recently, we've compared the screening data with actual abundances from Konza. It turns out that there is no relationship between abundance and mycorrhizal responsiveness or infection rates. As such, mycorrhizal symbioses are likely not necessary for success.
That said, mycorrhizal symbioses do determine which species perform better under certain conditions. For example, almost 25% of the variation in the response of species abundance to the presence of grazers (bison) was explained by the mycorrhizal infection rate. Grazing promoted non-mycorrhizal species. Similarly, suppression of fire promotes non-mycorrhizal species (data not shown).
In both cases, fire suppression and grazing increase the availability of nutrients relative to other resources. How to think of the role of mycorrhizal under different burning or grazing regimes is still not clear. It's easy to say that fire suppression or grazing increases nutrient availability, which decreases the need for mycorrhizal fungi. But why? Is it because they are too much of a carbon drain? Many of the high-fire, low-grazing species just do not grow at all in the absence of mycorrhizal fungi, so it is unlikely to be associated with competition for nutrients. And why would mycorrhizal responses/infection predict just the responses to grazing/fire, but not abundance overall. In contrast, we see traits like leaf tissue density--which I think of as being associated with low nutrient availability--prediction abundance across Konza, but not the responses to fire and grazing.
How to proceed on the issue is not easy, but it's a curious pattern to line up with a number of others in understanding how grassland communities are structured.
Wilson, G. W. T. and D. C. Hartnett. 1998. Interspecific variation in plant responses to mycorrhizal colonization in tallgrass prairie. American Journal of Botany 85:1732-1738.
Posted by JMC at 9:11 PM No comments: