Underinvestment: funding ecological research has become a lottery with too many losers

Right now, across America, ecologists are receiving unwanted emails from the National Science Foundation. The emails state that their proposals for research were found to have merit, but not recommended for continued consideration for funding. A few months later, more of these emails will be sent out as the field is further winnowed.

Although the funding process is thought of as competitive, it's not the type of competition that improves the competitors.

It's a lottery with too many losers.

The crisis in ecology is clear. We are underinvesting to solve tomorrow’s environmental problems.

The major limitation to advancement of ecological science is funding.

NSF is funding around 5% of the ecological research proposals these days.

That’s probably a factor of 4 too low.

The consequences of this underinvestment may not be clear today, but it doesn’t take much imagination to grasp what they might be.

Already we live in a compromised world. Our climate is warming as greenhouse gases build. Droughts and storms are becoming more severe, more widespread, more intense than ever before. Dead zones in our lakes and oceans destroy fisheries that haven’t already been overharvested. Polluted airs compromise the health of millions. Rising oceans threaten coastal areas. Frozen soils and ice caps are melting. Extinctions continue unabated.

The future of human civilization depends in part on two things. It depends on our ability to understand how ecosystems work. And the ability of our societies to utilize this knowledge.

Our understanding of ecosystem ecology might not dictate whether human civilization will exist, but it will determine the form civilization takes.

And we are underinvesting in our future abilities to solve these problems.

Underinvestment is a political problem. Governments and philanthropic organizations choose where to send scarce resources. There are more than enough resources to invest fully in the science of our environmental problems.

How much we should invest is not easy.

Politicians are constantly being asked to compare apples and oranges.

But why we underinvest is an important question.
In general, underinvestment can happen when the perceived potential returns on the investment to the investor are exceeded by the costs. Governments invest because external returns can be internalized in ways that often can’t for individual investors.

Despite governments ability to internalize external rewards, we still underinvest in basic research?

Some calculations are political in the sense that they are not made to maximize benefits for the nation, but instead the elected (and those that helped elect them).

Separating the two motives is impossible.

It shouldn’t be attempted.

The arguments are the same regardless of the motive.

In 2011, Senator Coburn of Oklahoma released a report "Under the Microscope". The report detailed expenditures by the National Science Foundation that were considered by the senator to be wasteful or mismanaged.

The report highlighted individual research projects funded by NSF. These were used as examples of research that was considered "examples of the more than $3 billion in waste and duplication".

The report by and large simply reprinted some of the summaries of individual research projects.

“How many birds live in the “hood?” The Cornell University Ornithology Lab has received millions of NSF dollars for “Informal Science Education” purposes.”

Nest cams were held up as obviously wasteful.

These examples are not unique. Ecology is a perennial target.

In all, these sound perfectly reasonable to most ecologists, but can sound as wasteful as thousand dollar screwdrivers to the public.

Ecology has done an average job of being reactive to criticism about funding.

It should be noted that there have been some nuanced responses like this or this. Michael Mann's responses to criticism has always stood out as something to emulate.

Yet, ecology (and related disciplines) have done worse about being proactive.

It’s important to learn how to promote the benefits of investment, so that, regardless of the motive, arguments for underinvestment are untenable.

The goal for ecology has to be to have environmental research be unquestionable.

The American Society of Civil Engineers has done an amazing job of structuring the debate on investment.

Ecology needs to do the same.

It has to be clear that failing ecosystems are as bad as failing bridges.

And we have to be clear about the level of investment necessary needed to prevent this.

It's not that there hasn't been any effort to do this.

I’ll try to expand on some thoughts on how to do this later.

A look ahead on online teaching for science

Here are some thoughts on how on-line education is likely to go for the sciences in the next few years.

In general, the classes with that are most likely to be affected by on-line education are large lectures without labs. Because just a few dozen introductory courses account for the majority of the credits delivered in universities, these are the courses where the greatest economies of scale are.  Look where textbook publishers concentrate and this is where on-line classes will concentrate.

Students will likely take the lecture at distance for these courses and, if anything, colleges and universities will provide recitation opportunities. It's not unlike the consequences of centralized textbook publishing, which hasn't negatively impacted university stature, but still, it's a broad diminishment of responsibility.

Trickling up, I think more broadly, the first effect of on-line education is the cannibalization of two-year institutions at the state level. These are the institutions that often are used as preparatory schools for 4-year institutions and where costs are most closely watched. Many students that attend 2-year institutions do so to save money. There are about 8M students in community colleges in the US, somewhere on the order of 40% of all students enrolled (20M) in higher education.


Will there be consolidation across states? Likely. It'll be just like what has been happening for athletic conferences. Intro courses will be shared across campuses broadly.

What about science courses?

The way that these courses get disrupted is likely to split lectures and labs, with lectures delivered electronically and labs in person.

Labs may be the last refuge for general science courses in universities. Still, a semester's worth of labs  can be compressed into a single weekend. Universities become like regional testing centers.

So, what is it all going to look like?

Just like textbook consolidation and monopolies, lectures for classes will become centralized in their production. This is not a bad thing for students as the quality is likely to go up. Universities will fill a different role in reinforcing learning rather providing content.

How many state schools are there in Ohio? (13) Think the regents there will tolerate expensive redundancy?

After that, courses will start to be shared across state lines.

Quality of content provision is likely to increase. Costs should go down. Faculty lines are likely to go down (at least as a ratio).

How much cheaper should tuition be? Some states want a 10K Bachelors. That's a ways off.

In-state tuition and fees averages about $9K at public institutions. That number should drop by at least a third after the initial wave of consolidation.

All of this is unsettling to some, but it's going to happen.

There are likely to be more losers than winners in academia. A lot of faculty get paid a lot of money for what will soon be redundant with less expensive options.

Students are likely to be winners though. They will get more consistent, higher quality instruction for introductory courses at a lower cost. Waitlists will be a thing of the past. So will bad seats in a CO2-enriched auditorium.

At a later point, I'll cover some of the ways that universities can maintain their relevance in ways that benefit students even more. Consolidation is going to free up a number of resources. If universities are creative and nimble, they can weather the disruption, if not prosper.


Earlier I had summarized some of the results from a cross-site study on bison weights. This was posted right before I was about to submit it for the first time. I ended the post with:

"[Regarding details, I'm about to submit this paper. We'll see how it's met.]"

The paper has been accepted for publication by PLOS One, but that was a semi-rough path to publication. It was reviewed by 3 other journals before being accepted.*** Reviewers mostly got caught up on how best to analyze cross-site data when you have more than one measurement for a site.

***As a note, my record is currently 5 journals reviewing a paper before acceptance. The 15N synthesis was reviewed by Nature (1), PNAS (2 rounds), Global Change Biology (2 rounds), Oecologia (2 rounds), and New Phytologist (2 rounds). The number of rejections seems to have no bearing on how important the paper is. That paper has since been cited 100+ times since its publication in 2009.

The final bison paper will have controversy associated with it. It essentially uses a spatial gradient of climate to help forecast the future. It's less than perfect, but what other option is there for grazers? Experiments without grazers don't incorporate the feedbacks from grazing, which are substantial. Experiments with grazers are unfeasible. Models? Sure, but no way to parameterize. Temporal responses are good ways to narrow predictions, but they don't do well predicting long-term responses with slower feedbacks.

Case in point. Bison from warm sites are smaller than cool sites. Yet, bison gain the same amount of weight in hot years as cool ones.

In all, climate change effects on grazers is probably one of the most pressing scientific questions we have about grazers. One of the limitations of the paper is transferring knowledge of bison to cattle. But, we just don't have the data on cattle at this time.

Whoever can synthesize cross-site patterns of cattle weight gain will have done some important science.

Lecture on National Climate Assessment up 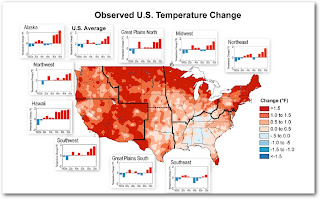 As part of the on-line ecosystem ecology course I am putting together, I uploaded a series of lectures on the National Climate Assessment.

In total, about 30 minutes of summarizing some of the main points about changes in climate that were presented in the draft version of the National Climate Assessment.

It's still one of the most amazing scientific documents one can read.

If you don't read the document, it couldn't hurt to view this.

Link to YouTube Playlist is here.
Posted by JMC at 6:53 AM No comments: 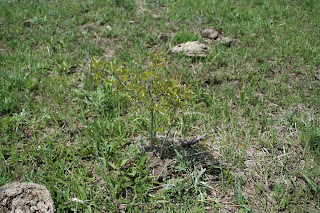 One of the curious things at Konza is the dispersal of Gleditsia tricanthos (locust). Gledtsia has pretty big seeds encased in large pods that were likely dispersed by megafauna. Yet, even today you can find isolated seedlings/saplings pretty far from the parent tree.

What was moving the seeds?

This winter I noticed that bison dung at Konza was packed with locust (Gleditsia) seeds.

This spring, it's clear that they are germinating in the dung. 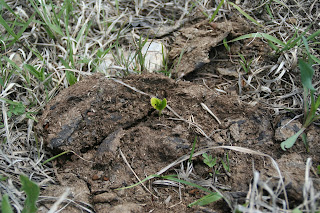 Something I had never noticed before, but pretty clear now.

Bison eat and disperse the seeds of trees. 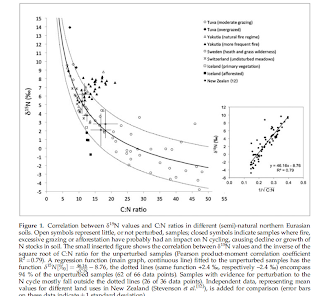 Quick note on an interesting paper regarding soil N isotopes.

Cohen et al. synthesized about 100 soil samples for C:N and 15N. They found a good relationship between soil C:N and 15N. Beyond this, those soils that were considered "perturbed"were more elevated at a given C:N.

They felt that overgrazing or fire led to enriched 15N when compared at a given C:N.

In conclusion, they state "The d15N natural abundance values, when related to the C:N ratios, may readily indicate perturbation of soil N cycling prior to other..."