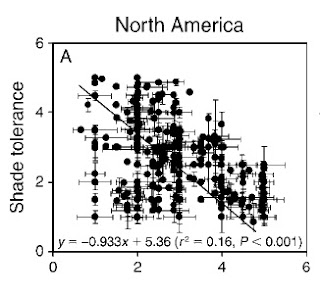 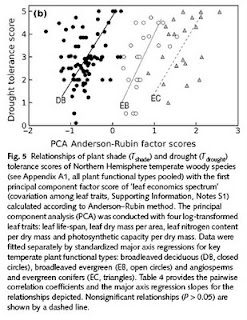 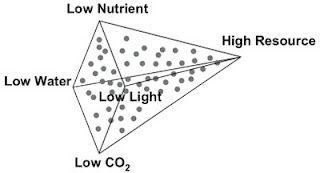 Niinemets, U. and F. Valladares. 2006. Tolerance to shade, drought, and waterlogging of temperate Northern Hemisphere trees and shrubs. Ecological Monographs 76:521-547.
Hallik, L., U. Niinemets, and I. J. Wright. 2009. Are species shade and drought tolerance reflected in leaf-level structural and functional differentiation in Northern Hemisphere temperate woody flora? New Phytologist 184:257-274.
Posted by JMC at 4:23 AM No comments:

I guess I said this once to Kendra.

We both couldn't remember what the phrase was.

I wished I had Posted this, so I could just look it up.

Then she remembered it.

The context for the statement is that if you look at someone's research, it can be difficult to judge whether their work is isolated and unlikely to have much impact (fringe) vs. being a cornerstone to future ways of thinking (frontier).
Posted by JMC at 8:00 PM 1 comment:

How to use the h-index

A few have asked me how to use the h-index in light of what I showed earlier. In many cases, the h-index is used for promotions, for example. For assessments, I would recommend not just looking at a person's h-index, but instead examining the residual h-index and finding good comparables.

There are always caveats to this, but it’s clear that for the purposes of assessment, one should examine the number of publications and the time a person has been publishing as well as the residual H-index from scientists in the discipline. This is probably the best metric of impact beyond number of papers.
Find comparables.
One of the benefits of the approach is to be able to find comparables. Just like in real estate, appraisals are used to determine the potential market value of a house and are anchored with the sale value of comparable houses. Just like researchers, no two houses are exactly alike (except in some uninteresting subdivisions), but they can be compared.
My approach to finding comparables is to generate the relationship between the H-index and the number of publications and the number of years publishing. Then, determine the next closest people in the space defined by the actual and predicted H-index. For example, calculating a Euclidean distance between my scores (H-index = 22, predicted = 20.4), the next closest person to me is a friend of mine, actually: 80 pubs in 12 years, H-index of 24, predicted 23.4. Euclidean distance = 3.6.
The person furthest from me? My advisor, Terry Chapin. 321 publications—probably more with some misspellings. H-index of 84. Predicted H-index of 80. Distance of 86.
Here’s a graph of distance from my scores as a function of H-index for reference.
Posted by JMC at 11:47 AM No comments:

The H index: how many for how long

I looked at the H indices a little bit more today. In short, I added a number of people to see if I could bust any of the relationships. Again, these are people at different career stages in a similar field as me from the US.

I knew that I could find people that have been published on papers that were highly cited, but they didn't have a high H-index. That wasn't too hard. Being a coauthor on a highly-cited paper isn't as diagnostic as the number of publications and the number of years cited.

Outside of Tilman, when you take into account the number of publications and how long they've been publishing, that's 90% of the variation in H-index. National Academy members (red dots) aren't necessarily higher or lower than non-academy members (P = 0.2). You can find individuals 10 points higher than you expect, which is diagnostic of something, but looking at the individuals that are 10 points too low, I don't think one would denigrate their stature because their h-index was 65 not 75. Still, there might be something to the residuals.

One thing that is interesting here is that the h-index, at least in my discipline and for almost everyone, really doesn't provide much more information than knowing the number of publications and how long they've been publishing.

The H index might not necessarily provide more information for most than how many for how long, but what is represented by an H-index of 45 is pretty impressive.

"Hirsch suggested that, for physicists, a value for h of about 10–12 might be a useful guideline for tenure decisions at major research universities. A value of about 18 could mean a full professorship, 15–20 could mean a fellowship in the American Physical Society, and 45 or higher could mean membership in the United States National Academy of Sciences.[3] Little systematic investigation has been made on how academic recognition correlates with h-index over different institutions, nations and fields of study."--Wikipedia.
In some scientific circles, the h-index is the summary figure of productivity. The h index combines the number of publications (h) that have been cited h times. if someone has published 10 papers cited 10 times, their index is 10. 11 papers each cited at least 11 times, the index is 11.
What's interesting to me is that there would be typical values for someone to be considered for the National Academy. Apparently the number is 45--45 papers cited at least 45 times.
One shouldn't get too hung up on metrics of scientific importance--they are too easily skewed and sliding scales are always necessary--but how does one get to 45? Publish a lot of papers? Start publishing early? Publish long? Or just write (or co-write) 45 great papers?
I told myself I'd only spend 20 minutes on this, so I'll be brief.
I spent 20 minutes looking up h-index values for selected Academy members plus a few others and some early-career scientists (a few friends). In addition to h index, I calculated how long they had published, the number of papers published, and the most cited paper.
This is by no way scientific. Values can be off, etc.
Most of the national academy members were above 45.
Of the three predictors, the best predictor of h index was number of publications.

More work would probably blow this relationship apart, but one key take-home point would be to keep publishing, not worrying as much about the golden publication that'll be cited 1000 times.
Back to real work....
Posted by JMC at 6:31 AM No comments:

Quick note on a new paper.


Scoffoni et al. determined the physiological drought tolerance and architecture of 10 woody species. The authors test key components of leaf venation architecture to understand the underlying leaf structural mechanisms for drought tolerance. Most work on drought tolerance focuses on stems and highlight xylem geometries, but the authors show that the density of veins in a leaf are the best correlate with its physiological tolerance of drought. High vein density provides insurance against embolism and allows water to continue to be supplied to areas adjacent to veins that have experienced embolisms that necessarily accompany low water potentials.


The authors highlight the need to separate leaf size and vein density, which were correlated in the study. But, the research raises an interesting question as to whether the need for higher vein densities serves as a constraint on leaf size and ultimately contributes to one of the major biogeographic patterns of plant form.


I also think their figure, shown above, is pretty stunning.


We know a bit about the ancestor of Poaceae. All the main defining characters of grasses like the parallel venation, the monocotyledon, and the distinctive grass flowers, were present in the ancestral grass. What did the first grassland look like? What about it's ecology? Did grasses start in the shade and come out in the open? Were they from wet soils and evolved to inhabit the dry?
We don't have a time machine, but we do have the ability to assemble the phylogentic relationships among grasses and infer origins. Steve Kembel helped out and took Erika Edwards phylogeny from her PNAS paper and arrayed physiological drought tolerance data from 165 species from our experiment that matched with her phylogeny.
The first thing that pops out is there is no phylogenetic signal to the data. Drought tolerance pops up throughout the phylogeny. If true--and our dataset is by no means definitive yet--then drought tolerance might be evolutionary labile. It might not take that many mutations to confer physiological drought tolerance.
But what about the ancestral trait? Was the mother of all grasses physiologically drought tolerant? That specific analysis has yet to be run, but likely not. Most of the modern grasses are not terribly drought tolerant and the most parsimonious explanation for that--as I understand it--is that it is more likely that the relatively small fraction of grasses that are super-drought tolerant hold the derived trait.

As they say, watch this space. We're going to try to prove ourselves wrong in the meantime.
Posted by JMC at 7:50 PM No comments: