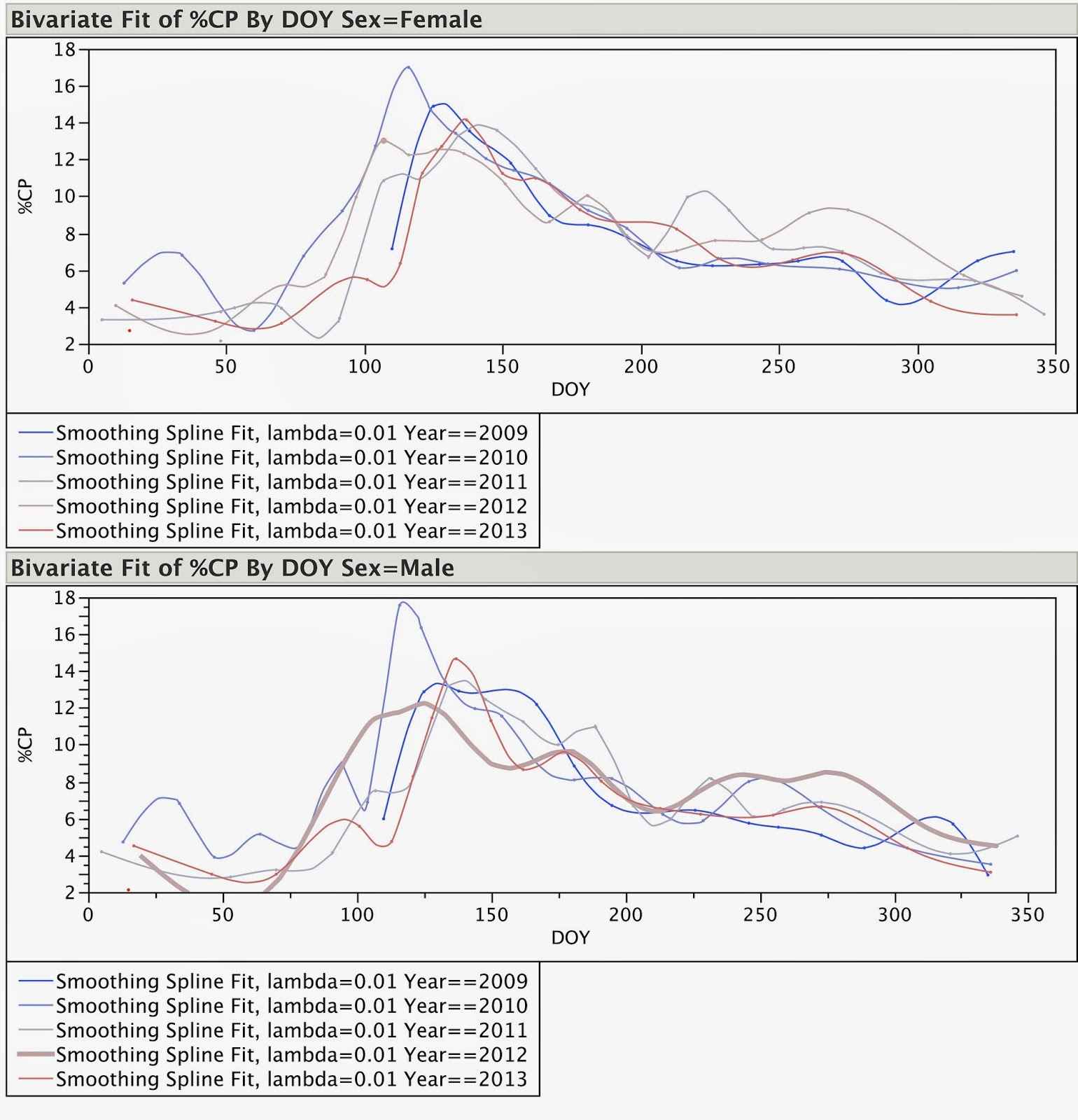 Here is some science in action today.

We have been measuring the quality of the diet of bison for 5 years now. Every 2 weeks or so, Gene Towne collects fecals from the bison at Konza. We then send them off to Texas AM to be analyzed for dietary quality. Because protein is most limiting to bison, we focus on % crude protein in the diet as an index of quality.

What you see across years is that when grass greens up in the spring, the quality of the diet rapidly goes up, peaks, and then declines.

This happens every year in the spring, but the timing of the peak varies among years. These peaks can vary by over a month across years. Sometimes grass is best to eat in mid-April. Sometimes mid-May.

One question is what is driving this? How do we predict this? **

**"Why do this?" is another question. Partly, we're curious. Partly, it could explain a lot about why animals gain more weight in some years and help us predict what happens if we get warmer springs.

Here's what the technique reveals...

For Females, the best predictor is that peak crude protein occurs right after having 20 d of average maximum temperature of 23°C.

For Males, the best predictor is that peak CP occurs right after having 25 d of average maximum temperature of 22.6°C.

When each year, you calculate when you get these average temperatures, you explain 73% of the variance in the timing of peak CP. 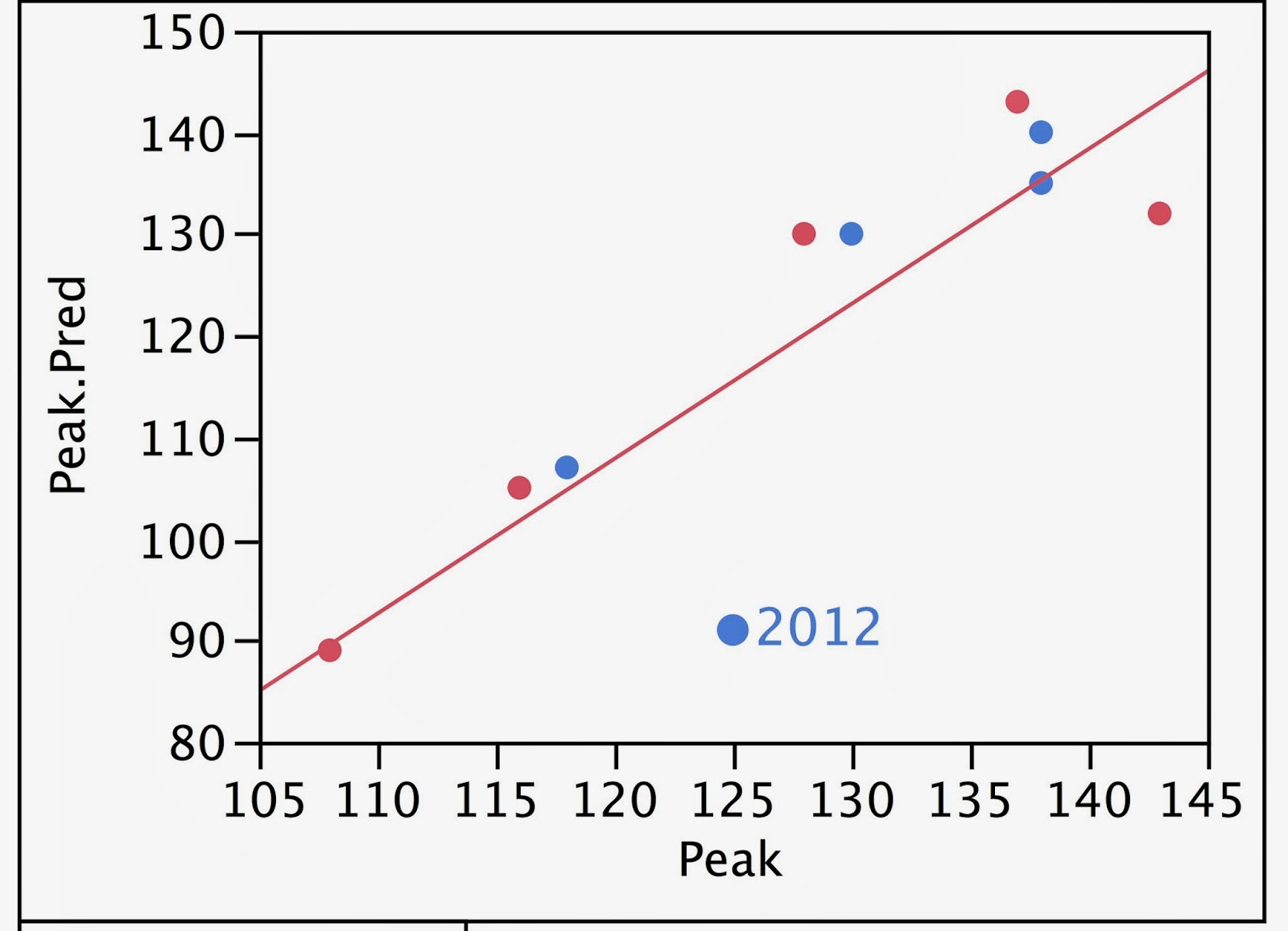 So, in any year, take a look at maximum daily temperatures (I haven't tried means yet). When you get 20 or 25 d of temperatures hitting ~23°C (73°F), that's when you get peak dietary quality. After that, it's all downhill.

What is interesting is that 2012 is an outlier. We averaged 23°C a month earlier than when peak CP hit.

It seems that when those temperatures hit early in the year, the peak happens later than expected.

That could some phenological constraint of our warm-season grasses...

I'll play around with this some more (and probably have to amend this), but not bad for a first pass.

Bar bet of the day: does pollen have chloroplasts?

Can you sequence chloroplast DNA from pollen?

For gymnosperms, pollen is transferred via the pollen, so yes in them.

But in angiosperms, it's maternal, so no.

But, Wikipedia says "Pollen itself is not the male gamete.[1] Each pollen grain contains vegetative (non-reproductive) cells (only a single cell in most flowering plants but several in other seed plants) and a generative (reproductive) cell containing two nuclei: a tube nucleus (that produces the pollen tube) and a generative nucleus (that divides to form the two sperm cells)."

That means it should be yes.

Yet, we asked one botanist and they said,

"mostly you should NOT be able to find plastid DNA in pollen (see papers like Corriveau et al., 1990, Plastid DNA is not detectable in the male gametes and pollen tubes of an angiosperm (Antirrhinum majus) that is maternal for plastid inheritance."

Then we asked another, and they said

"A pollen grain represents the mature male gametophyte. It is a multicellular product of mitosis. Absolutely it contains a chloroplast genome... It's just that (usually) the cp genome from the pollen is excluded during zygote formation...."

That would suggest yes.

We haven't settled this bar bet yet.

Once we do, we should know how best to use molecular tools to identify pollen...

A new paper on the tundra came out in Nature. I had a small role in this paper, but found it fascinating.

Reconstructing the vegetation of the Pleistocene steppe by using frozen DNA instead of relying on pollen, it repaints the picture of the Arctic when the megafauna roamed the steppe. Instead of a grassy ecosystem, it was a colorful landscape of wildflowers.

More interestingly, the megafauna ate a lot of wildflowers.

Whether they preferred wildflowers over grasses or not is unknown, but a large proportion of the protein that they took in likely came from forbs.

And when the megafauna went extinct, the wildflowers declined in abundance.

The same thing happens when we pull grazers off of modern grasslands.

There isn't any evidence to support that something wiped out the forbs, which cascaded to wipe out the megafauna. Yet, the reduction of the high-protein forbs as grasses took over might have hastened their demise.

Not all aspects of climate are changing lock-step.

Another note to myself on climate these days. This time on the rate of climate change.

Dobrowski et al. 2013 in GCB looked at the rate of change of minimum temperatures, evapotranspiration, and water deficit in the US over the past ~100 y.

The patterns show some divergence with some places getting warmer, others cooler (which has been seen before), but different patterns between rates of change in minimum temperatures and water deficits for example.

Not all aspects of climate are changing lock-step.

Given different patterns of warming in spring vs. fall that we see in KS, I'd really like to see this broken down by season. 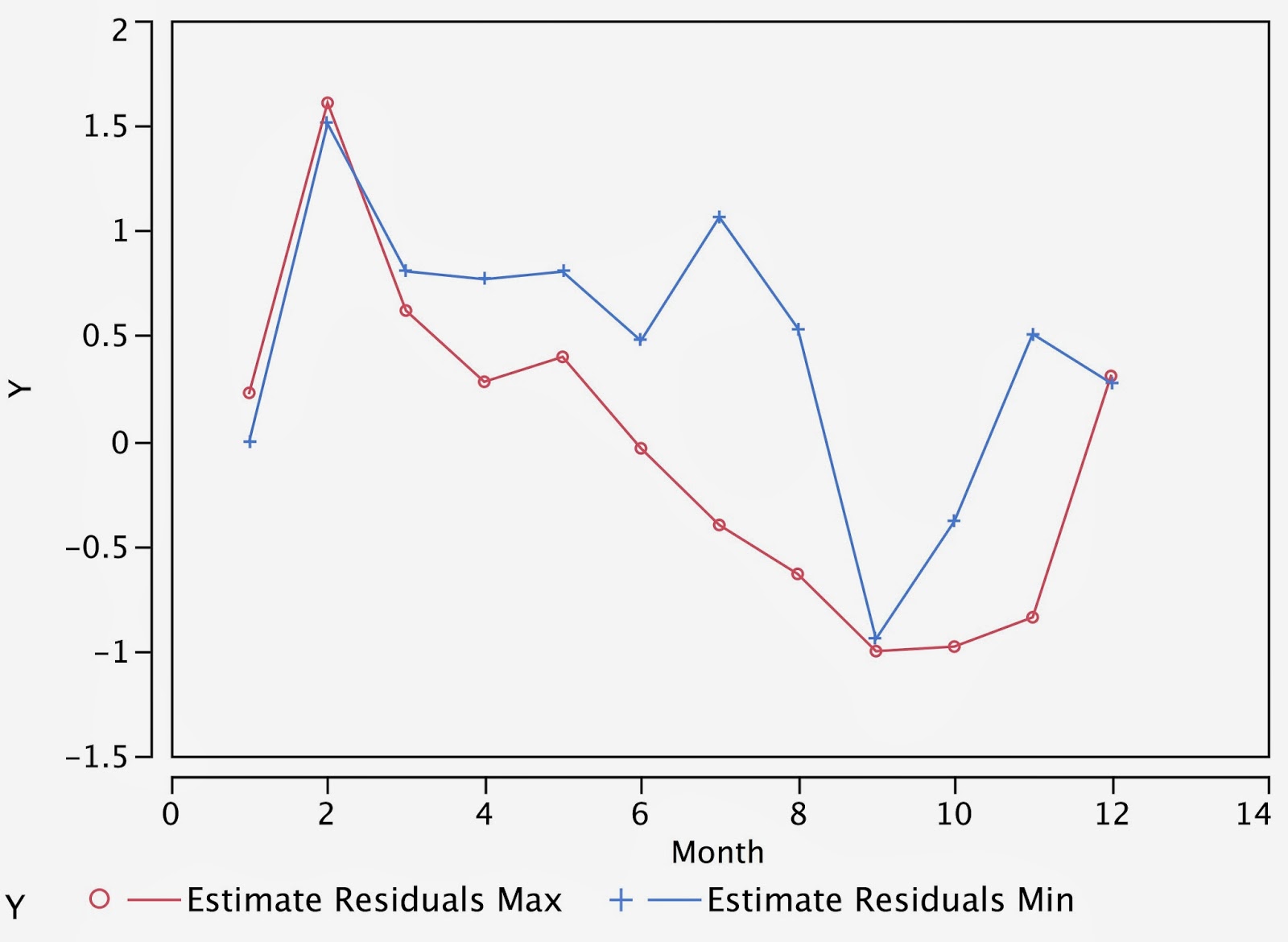 This is really just a note to myself, but I was looking at the Manhattan, KS weather data back to 1900.

I calculated temperature anomaly for each day relative to a typical seasonal curve (spline for DOY vs. Max or Min temperature).

When I calculate the average anomalies over time by month since 1900 (y-axis is change in temperature in °F since 1900) a few things pop out that I'm not sure I've known before.

A year of global weather collapsed to 8 minutes.
Posted by JMC at 6:51 PM No comments: