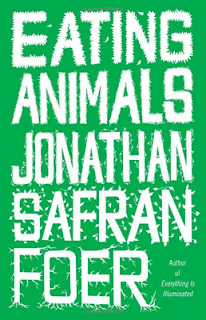 At home, we buy our hogs from a local farmer that raises Duroc. The bacon is amazing. Our lamb is local (either K-State or a local farmer). Often (but not often enough) our chickens our heritage and come from Frank Reese. The chicken is tough, but amazingly flavorful. Our Thanksgiving turkeys from Frank are amazing. We don't have a local beef supplier, but we'll often get bison from Konza.

I like my barbecue. I like my smoker. That said, I spent 4 days as a vegetarian last week. I thought that was a good genuflection while reading Eating Animals by Jonathan Safran Foer. The book is his exploration to understand the place of carnivory in our world. It's a Jewish approach to the topic--"to understand is to question"--and generates a multi-faceted view of the topic that examines cultural, health, economic, and environmental questions. It's a book that is as tough to put down as it is to keep reading.

The environmental aspects are worth noting here. He summarizes well the environmental costs of modern factory farming (and fishing). Its externalities born on society and the environment are not trivial. For example, he writes "At one point, three factory farms in North Carolina were producing more nitrogen...than all the crops in the state could absorb". He also notes that the UN's FAO recently stated that farmed animals contribute more to climate change than the entire transport sector.

The environmental costs of raising and eating animals has fallen through the cracks largely in the ecological community. For example, we study N eutrophication of systems, but less often study the social, cultural, and economic forces that generate them. Governments have often punted on this issue, which then means scientific societies have to stretch to fill the gap.

Most noteworthy in the book, for all the environmental costs of raising animals in a factory setting, the marginal cost of raising pigs in pasture: 5 cents a pound.

There's the old joke about two campers being chased by a bear. The discussion between the two campers as they flee the bear typically involves one camper putting on running shoes and centers around whether it is necessary to outrun the bear or outrun the other camper. The implication being that the bear will eat whoever is slower.

One of the common patterns of reviewers is "What-About-This?" syndrome. I first noticed this in EcoLunch at Berkeley when one member seemed to almost invariably to ask the presenter about an extreme point on a scatter plot (What about that point? What happened there?). There is merit to examining individual cases, but outliers never disprove generalities.

Often, a reviewer will raise an issue or an alternative hypothesis not discussed by the authors. It's impossible for authors to raise every issue or alternative hypothesis, so these comments are always possible. Generally, the reviewer will not describe how this hypothesis is more parsimonious or how it invalidates the support for the hypothesis. For a paper to be rejected by the simple raising of a "what-about-this" point implies that all competing hypotheses have to be disproved.

Theoretically, when we test hypotheses, we seek out the most parsimonious explanation. This is codified in some statistical tests, e.g. AIC model testing. This is codified in the way we reconstruct phylogenetic trees. Yet, often when we evaluate whether a paper should enter the scientific literature, it is as if a different set of rules applies.

The question that has never been answered with regard to reviewing is whose role is it to evaluate parsimony? If a reviewer raises a what-about-this that could serve as an alternative hypothesis, is it their responsibility to show that is also likely more parsimonious? Or is it then the author's role? If the latter, then the editor cannot allow a paper to be rejected on scientific grounds based on what-about-this's.

Parsimony is a slippery topic, but so is proof. We need to promote discussions of parsimony not only for the mechanics of science, but also for its application. When the debate becomes whether we have proved that the Earth is warming, that debate is already lost. A common tactic is to raise what-about-this's and use that as evidence denying proof.

Application of science needs to engender parsimony. But so does the scientific process itself.

The footrace in science is never about crossing the finish line, only staying ahead of the other runners.
Posted by JMC at 6:13 AM No comments: