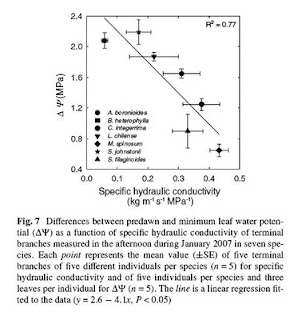 Selection on plants has always worked to coordinate the functions of all the plant parts together. Demand must be coordinated with supply. The demand for N and water by leaves cannot outstrip the ability of roots to acquire them, or stems to move them. Root growth needs to be in balance with shoot carbon supply.
Bucci et al. just published a nice study on the coordination between roots, stems, and leaves for moving water among Patagonian woody species. Deeply rooted species have access to lots of water at all times. Shallowly rooted species undergo periodic water stress as the shallow soils dry out.
They found that deeply rooted species had low hydraulic conductivity (water moves slow through stems and leaves), low SLA, and high wood density. The shallower-rooted species, even though they were frequently under water stress, had high conductivity in stems and leaves, high SLA, and low wood density.
The patterns are great, but I think the authors interpret the patterns wrong. Plants with access to lots of water and no water stress should have high conductivity, not low. Why if the shallow species frequently experience severe water stress wouldn't they be more resistant to cavitation, which would lower conductivity? The authors state that "It appears that the marginal cost of having an extensive root system (e.g., high Rho_w and root hydraulic resistance) contributes to low growth rates of the deeply rooted species."
More likely, all the nutrients are in the shallow soils and the deeply rooted species are adapted to low nutrient availability. The shallow species have periods of high nutrient availability and need to grow quick. It's the high resource strategy, which can end catastrophically if soils dry out too quickly, but also ends by the superior canopy of faster-growing competitors if they are built to withstand drying later.
Posted by JMC at 2:25 PM No comments:

A point on the horizon

There have been a few interesting papers that have recently been published that I'll mention soon.
In the meantime, I sometimes wonder about the future of the plant trait discipline--that mix of evolution and ecology. It seems pretty fractious at times. Evolutionary biologists often take umbrage at the lack of sophistication at which ecologists attempt to describe evolutionary patterns of functional traits. Ecologists just can't contextualize the traits that evolutionary biologists examine and/or the species that they use. How easy is it to see the significance of variation in the lac10 gene? [I just made that name up, but it turns out it exists.] Among those researchers that straddle the middle ground, different research groups seemed locked into a single framework of explaining how the world works. A lot of these divisions fall (implicitly) along some basic assumptions of how the world is structured (competition vs. facilitation, pulsed vs evenly-supplied resources), while others fall along sets of traits. Mycorrhizal ecologists can feel disrespect when the traits stop at the root tip. Microbial ecologists want to know more about organic N uptake. Some ecologists measure SLA, others tissue density, others fresh weight to dry weight ratios.
All the division can be healthy--the world is a complex place. But, it can also be miring. They'll never be settled any time soon--or at least haven't in the past 30 years.
Sometimes I think that we need a goal on the horizon that is magnificent enough to grow the field so everyone can be funded to work without feeling that another person's success might be their failure. And, that it would be interesting enough for people to not focus too tight on the details.
I wrote about this a bit in RSWP, but one of these goal has to be to be able to compare the functional trait distributions of entire florae. Think about comparing the drought resistance of grasslands from Alberta to those of Hungary. Or the shade tolerance of a northern Australia eucalyptus rainforest to those of the broad-leaved forests of northeast North America.
As ecologists (or biogeographers) we often discuss the roles of radiation and sorting on the composition of flora. But, we've never really been able to show that at the massive scales these really play out. We need experiments that grow thousands of species side by side. We need to identify key functional traits that can be measured under standardized conditions. And we this should be done in a phylogenetic context.
Posted by JMC at 2:31 PM No comments:

Climate, the nutritional value of grass, and the Wisconsin paradox 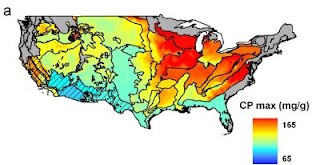 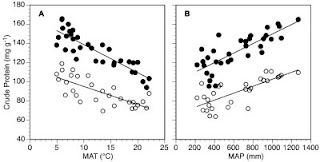 The paradox can be ascribed to management of grasslands. In native grasslands, tallgrass is sour. Yet, for managed grasslands, tallgrass is sweet. What do they do in places like Wisconsin to turn sour sweet? One hypothesis is that it is the grazing itself. Managers make sure that the pastures are intensively grazed so that quality never declines. Another is that managers make sure that the grasslands don't burn. A third is by controlling species composition, managers can favor palatable species. Planting legumes and cool-season European grasses might be enough to turn the sour sweet.
The different patterns in native and managed grasslands raise some important questions about how well we understand grasslands. At its most basic level, we still aren't sure what drives the fundamental characteristics of tallgrass and shortgrass.
Posted by JMC at 2:51 AM 3 comments:

Why do plants close their stomata at night? 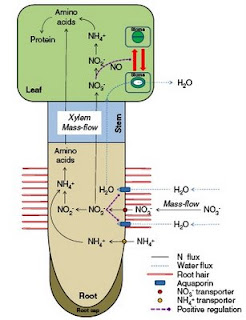 As the sun sets each night, most terrestrial plants close their stomata. It is reasoned that plants open their stomata to acquire CO2. At night, with no photosynthesis, there is no need to acquire CO2, and so the stomata can close.
Mike Cramer and coauthors just published a review in Oecologia that challenges some basic assumptions of the benefits of closing stomata at night. The authors state that mass flow of water to roots carries nutrients with it. For non-limiting nutrients, this flux alone can meet a plant's demand, but also could benefit the plant for a limiting nutrient that has low concentration in the soil solution. They cite many instances where NO3- can regulate water inflow into a root as additional evidence of the role of mass flow in plant nutrient acquisition.
In their summary, the authors state that "some plants [might be] designed not to conserve water, but rather to maximise the flux of water when it is abundant." This is a gauntlet-throwing statement.
The calculations of the role of mass flow in nutrient acquisition are 30+ years old. This doesn't make them wrong, but the models did not always ask the most pertinent questions. Would a plant competing against another plant be benefitted from a higher transpiration rate? Would a plant that keeps its stomata open at night acquire more nutrients than one that keeps them closed? And even if not, what are the negative consequences to a plant that left them open?
It's good that the authors raise such a basic question about how plants acquire resources from the soil. It's a good review that lays bare some fundamental questions about the constraints faced by terrestrial plants and ultimately their evolution.
Cramer, M. D., H. J. Hawkins, and G. A. Verboom. 2009. The importance of nutritional regulation of plant water flux. Oecologia.