Highlights from Nature Climate Change in 2015


Catching up on a year's worth of articles from Nature Climate Change. It's like binge-watching your favorite program. There are a lot of great "episodes", but here are some that stood out for me:

Mallakpour, I. and G. Villarini. 2015. The changing nature of flooding across the central United States. Nature Climate Change 5:250-254. 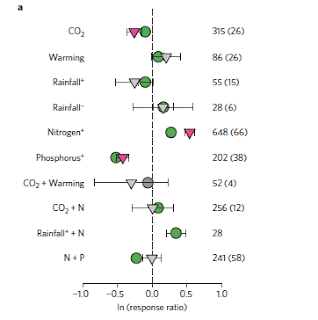 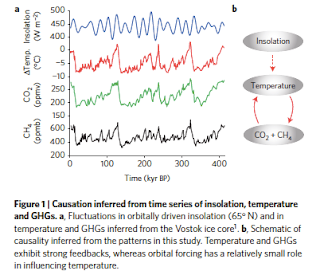 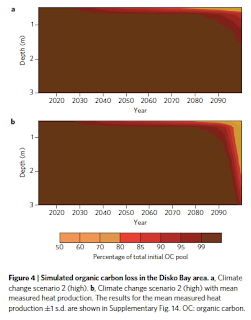 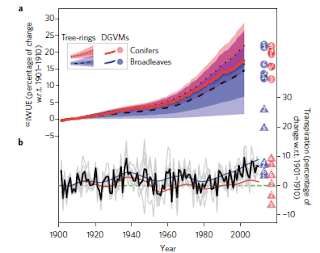 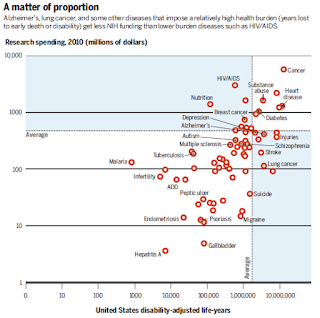 The above graph does not display patterns of ecological priorities. It's about funding at NIH (recently published in Science).

The y-axis is millions of dollars spent in 2010. The x-axis is disability adjusted life years--the cumulative number of years lost to ill-health, disability, or death. (DALY).

The relationship is a good one, in statistical terms. Diseases with a low burden are funded less than diseases with a high burden. There are residuals, too. Diseases with a global presence (malaria, AIDS) appear to be funded at a greater rate than their US DALY. Lung cancer, migraines, and suicide, which are not as trendy (or likely thought to be the fault of the stricken) are funded less.

My question today is why don't we have a graph like this for ecology/environmental science?

The first question would be what do we put on the x-axis? Do we have an ecological equivalent of DALY? Probably not. That right there is one of the biggest failings on how to prioritize. We don't have a standard to compare for prioritizing**.

**If anything, we make expert lists like "Top 50 Priorities in [insert discipline]"

That means ecological funding graph is likely to be a bar chart. Still, I'd like to see that.**

**I guess another way to do it would be to put it in terms of societal benefit. Ecological goods and services. X-axis would be dollars, then.

Then what are the categories?

We can't do it by standard categories like carbon cycling, population dynamics, community composition. These do not necessarily speak to societal challenges.

You need the equivalent of diseases. So, disease would be one category. Climate change, elevated CO2, nitrogen deposition, drought, biodiversity loss, water quality...

Then I guess you'd need to categorize funding for a given year from NSF and maybe EPA, USGS...

That graph wouldn't be as good as the DALY-funding graph, but I'd still like to see it.

The reason is that my suspicion is that funding priorities are all out of whack relative to societal need.  If we could have a bivariate plot, it'd be messier than the DALY graph.

My other suspicion is that the y-axis would be a lot smaller. Many of the most important ecological/environmental issues of our time wouldn't even hit the psoriasis level of funding, no less autism.**

**Heck, all of NSF Directorate for Biological Science ~$700M is about what NIH spends on depression.

If we could put together this graph, that should help arguments on how ecology/environmental science is funded.

Because my last suspicion is that we're underfunded. We wish we were funded like peptic ulcers, or even migraines relative to the importance of the issues.**

**I think down the line there is going to be a grand bargain where Congress will want NSF to justify their funding based on societal need. It might be a bargain worth taking if the ecological/environmental science gets funded at similar proportions to societal need as disease.