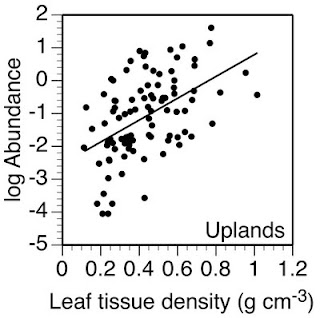 SLA should not be buried yet, but at some point, we are going to have to fundamentally reexamine the hierarchy of traits in the ecology of plants. A dichotomous world of high SLA and low SLA (if not high RGR and low RGR) plant species might have to be replaced. Until then, at the very least, measure thickness.
Posted by JMC at 5:55 AM No comments:

Canopy interception and the dispersed puddle 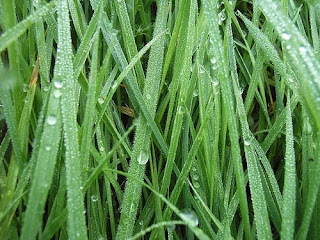 Taking a walk through grass after a light rain is a soaking affair. Even walking through a recently mowed lawn in the morning would wet your sneakers while going to school. It was always better to let the sun come out for a little bit before short-cutting across a yard.
The principle that most children learn at a young age likely has important ramifications for understanding the dynamics of how grasslands work. Through one of two mechanisms, my guess is that canopy interception sets up a negative feedback loop that constrains how much grass is produced.
First, a quick review.
In grasslands, approximately half of the precipitation can be intercepted by biomass without reaching the soils. For small precipitation events, 70% of the precipitation can be intercepted by a dry canopy, with the fraction of precipitation intercepted declining with event size (Ataroff and Naranjo 2009). A single square meter of grassland can withhold 2 L of water from reaching the soil. 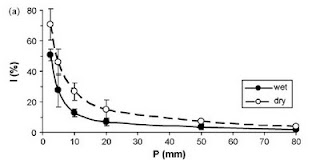 Relationship between precipitation and canopy interception for a tropical pasture grass. From Ataroff and Naranjo 2009.
Half of the precipitation that could fall on a grassland might never reach the soil. And the more grass there is, the less precipitation would reach the soil. Seasonally, as grass grows and canopies develop, the demand for water would be ever increasing. Yet, because of interception, less and less precipitation would reach the soil.
Increasing demand, decreasing supply. A classic negative feedback that would be limiting growth. Even if plants had access to deep water, the consequences might be greater for N supply and cause transitive limitation as surface soils where N mineralization occurs would be prevented from rewetting.
Evolutionarily, we haven't explored whether there would be selection on herbaceous species to promote (or not promote!) throughfall of precipitation. Altered leaf angle, waxy cuticles, stemminess, would all alter how much water is retained or passed on to the soil. Ecologically, with just a few papers on the topic, there are likely some large unexplored ramifications besides promoting seasonal water limitations. For example, from first principles, rain coming in larger events should promote growth, not retard it, as the water is stored in the soil rather than the canopy.
Most importantly of all, if you haven't learned it yet, never cut across a wet lawn in the morning wearing sneakers. Might as well jump in a puddle.
Posted by JMC at 4:51 AM No comments: