Declines in tree nutrient concentration over past 25 years 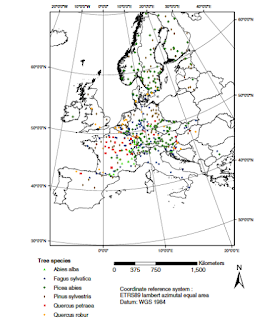 I've been trying to catch up on journals lately. Apparently, I hadn't read anything from Global Change Biology over the past 2 years. Must have been distracted. No time like the present...

Here's one that struck me as amazing.

Here's an example of the pattern for beech. white bars are concentrations, grey contents. 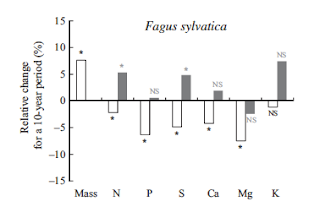 The authors focus on P nutrition the most, emphasizing the role of N deposition in promoting P limitation. Yet, even N concentrations were declining. These declines must be more than just N deposition causing imbalances, especially since N deposition has been declining over the time period.

The authors suggest elevated atmospheric CO2 might also be playing a role, as well as droughts and warming, but this paper mostly describes the pattern, which is fine.

The big question is: What is causing this massive, continental decline in nutrient concentrations?

The American Statistical Associations statement on the use of p-values can be found here.


My personal take is that there are a few corrections in how p-values are used.

2) the p-value reported needs to be contextualized with the number of comparisons made. this is where p-hacking shows up. if you do 20 independent analyses, 1 is likely to have p-value < 0.05. You need to state that you did an additional 19 analyses if you are reporting the 20th. if you went and added more data or looked more carefully for outliers because a p-value wasn't low enough, this needs to be reported.

3) p-values and effect sizes must be reported together. an independent assessment of whether the measured effect is biologically relevant is needed.

#2 on the list is the hardest to comprehend because it involves logical assumptions of the test.

The manuscript's explanation of this is:

At RetractionWatch, the author explains it this way: 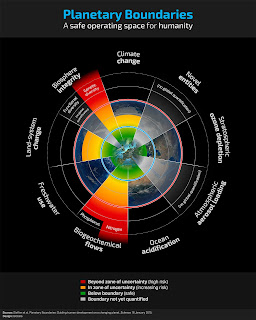 Biogeochemical Planetary Boundary: Beyond the zone of uncertainty? (Part I) 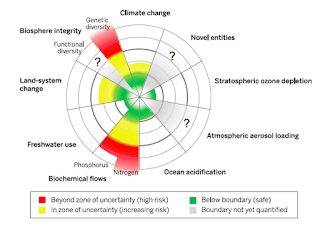 Keep fertilizing the ecosystem with N, and eventually the ecosystem reaches a threshold. Not only does productivity increase, but a lot of other things change. Suddenly, plant N concentrations increase a lot. The plant community shifts towards plants that thrive under higher N. They have high N concentrations, they use alkaloids instead of tannins to defend themselves, their leaves are built to capture as much light as possible, rather than avoid capturing too much light. In the soil, the soil microbial community shifts and the richness of N causes N to start leaving the soils in ways it hadn't before. More NO3- comes out in the waters. More gaseous N is lost to the atmosphere.

This threshold has been repeated experimentally in individual ecosystems throughout the world. And we've seen it when we non-experimentally add a lot of N to pastures or croplands or even forests.

What we see at the plot level or even at the level of the stand or region could potentially have analogs at the planetary level. As humans fix more and more N and more and more N is added to the ecosystems, could the whole planet flip states and autocatalyze from a oligotrophic world to a eutrophic world? Could N limitation become the exception, rather than the rule.

In 2009, Rockstrom et al. published their summary of the state of the earth in respect to Planetary Boundaries (see my 2012 post on the issue here). These planetary boundaries are planet-wide environmental boundaries or ‘tipping points’. Exceed these thresholds, and humanity is at risk.

That paper was updated last year by Steffen et al. As before, the authors state that for climate change, we have entered a "zone of uncertainty" with "increasing risk". Despite all the warming, the sea level rise, the collapsing ice sheets, the potential for a shutdown of the thermohaline circulation, losses of coral reefs, thawing of permafrost, and climatic reorganization underway, their summary is that humanity is still in a safe operating space climatically.

In contrast, for the global nitrogen cycle, the status is the same as in 2009. We are apparently beyond the zone of uncertainty, and humanity is currently at high risk of exceeding a planetary threshold.

The basis for this assessment is from a recent paper by de Vries et al. 2013.

Reading the paper, apparently, for the planet to have exceeded a planetary boundary for N requires that one of the following (according to the authors) has exceeded safe operating space:

There is really  no evidence of too much tropospheric ozone or too much groundwater contamination for humans to safely inhabit planet. Soils do not appear to be becoming acidified due to N deposition and fertilization globally. NOx levels are not deathly high. Stratospheric ozone levels are still recovering from CFC phase-outs.

Therefore, if humanity has exceeded a biogeochemical planetary boundary, then there must be evidence of planetary-scale eutrophication of terrestrial or marine ecosystems.

In a future post, I'll examine the intellectual tension about this idea...