Do I have to phylogenetically correct my grocery list? 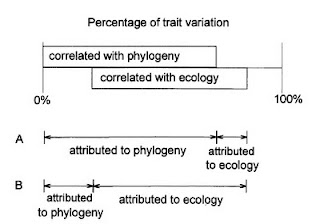 The figure of Westoby et al. (1995) that summarizes their view of the tension between phylogeny and ecology in understanding trait relationships.
For some, a simple grocery list can pose a dilemma. Just yesterday, I went to the store with 21 items to buy. Others would look at my list and suggest I only bought 11 items. Fresh peas and frozen peas shouldn't really be counted as different items--they were both peas. Cauliflower, broccoli, and collard greens are the same species. Mustard part of the same genus as the previous three. Hot dogs and pork chops both from pigs (I hope). So although 21 items went into the cart, one could phylogenetically correct my list and arrive at the conclusion that I only bought 11 unique items.
It might seem silly to phylogenetically correct one's grocery list, but how to consider both phylogenetic and ecological data when examining species relationships lays bare the same fundamental tension as describing my last trip to the grocer.
In 1995, Westoby, Leishman, and Lord published a forum piece, “On misinterpreting the 'phylogenetic correction'”. The genesis for the forum piece came during the review process of a paper on seed mass in plants. Most likely, during the review of that paper, differences in opinions between reviewers and authors were laid bare. In the original paper, the authors showed that tall plants had large seeds. The reviewers likely insisted that the relationships between plant height and seed size could be due to phylogenetic relationship. The authors disagreed. Differences in opinions became forums, which by ecology standards unleashed a bit of a storm.

The issues of how to identify adaptations or evolutionarily beneficial relationships cannot be covered here, but these fundamental issues have never been resolved, near as I can tell. The current détente that seems to exist is to examine ahistorical and “phylogenetically corrected” relationships among traits and hope that the patterns are the same. When setting to test relationships among species, choose congeneric species pairs from distantly related genera and hope the patterns work out consistently.

It’s currently an uneasy impasse. Both sides recognize that correlation does not necessarily imply causation. But outside of hoping that the evolutionary and ecological patterns parallel, there is still no resolution to the question of how to compare the traits of species.
I do know that if I want to shrink my grocery list, I'll start by not buying both cauliflower and broccoli rather than phylogenetically downweighting closely related taxa on my list.
Posted by JMC at 7:10 PM 2 comments:

The evolution of grasses: phylogeography of C4 photosynthesis 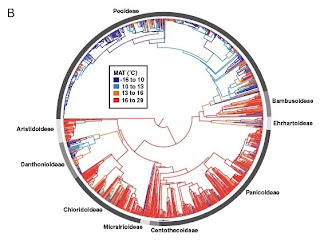 The temperature niches of grasses of the world overlaid onto their phylogenetic relationships.
The two great datasets in biology are the tree of life and the global biogeographic distributions. The first describes the phylogenetic relationships among organisms. The second describes their distributions on our planet. In a rich and well-nuanced paper, Edwards and Smith have brought the two together to shed light on one of the most fundamental questions regarding the evolutionary ecology of plants, namely the origin of C4 photosynthesis. The authors first use an expanded grass phylogeny to describe the origins of C4 photosynthesis in more detail than has done before. They then determine the current distribution of the grass species to determine the climates they occupy.
With regard to the evolution of C4 photosynthesis, the authors conclude that shifts from C3 to C4 photosynthesis did not involve shifts to warmer macroclimates, but instead to drier macroclimates. This results comes as a bit of a surprise--it is less clear that C4 photosynthesis is a response to low water availability as much as high temperatures. Their next logical step is a bit of a leap--namely that these modern geographic differences can be associated with habitat shifts in the past.
As important as the insights into the phylogeography of C4 photosynthesis is that the evolution of cold-tolerance in grasses is more difficult evolutionarily. Cold-tolerance apparently evolved vary early on in the grass radiation and has not been repeated to the degree that C4 photosynthesis has.
In all, this hardly seems like the last word on the topic. The biogeographic data needs to be improved, climatic ranges rather than centers will likely be used, and the grass phylogeny is still relatively unresolved. Also, we still have little understanding of why C4 photosynthesis would benefit plants in dry environments. That said, there is a lot of insight for many types of researchers and a solid step in understanding the strategies of plants to resource scarcity.

The competing constraints on roots Cross section of a Dicanthelium acuminatum root.
Roots have a few important jobs. Anchor a plant. Acquire water. Acquire nitrogen. Sometimes store carbon.
There is no reason that a root system that is optimized to acquire water would also be optimized to acquire nitrogen. Yet, what would a root system that was optimized to acquire water look like vs. one that was optimized to acquire nitrogen?
There are some contingencies here, but it's a good segue to think about how roots are built, no less root systems. There are multiple tradeoffs that would be selected for in different environments. Deep or shallow. Narrow vs. extensive. Thick vs. thin. Stele vs. cortex. Large xylem vs. small xylem. Many small cells vs. few large cells.
If form follows function, one should be able to deduce function from form. We can do this with many other traits. A thick waxy cuticle on a leaf generally reduces water or nutrient loss. Thick bark often protects from fire. Thorns deter browsing mammals.
Yet, if we were to look at the cross-section of a root, what could we tell?
Here's a cross-section of a Sorghastrum nutans root: 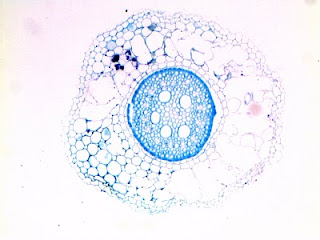 Now here's one for Penstemon tubiflorus: 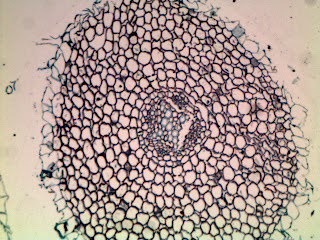 Some of the differences are obvious. Penstemon has a much larger cortex. Sorghastrum larger xylem vessels. But can we deduce their differences in ecology? Which one is more drought tolerant? Which one is the better competitor for nitrogen? Is one more dependent on mycorrhizal fungi?
Wahl and Ryser were the first to try to link up root cross-sections with function, finding good linkages with other traits like plant height and RGR. It's been 10 years since they published their paper on grass root cross sections. No one ever followed their work up.
One of the keys, if not linchpins, to understanding the evolution of plants is waiting for us just under the surface.

It is axiomatic to state that grasslands are dominated by grasses. It is also axiomatic to state that the trait that allows grasses to dominate grasslands is an adaptation to the grassland environment. The identities of the traits are currently unclear. For example, meristem position used to be the oft-cited reason for grass dominance, despite the clear evidence of many less abundant eudicots with similar meristem position. Yet, whenever we discover what the trait is that separates grasses from other species and allows them to dominate grasslands, we will never be able to declare that trait an adaptation. Such is that state of phylogenetic correctness.
There are many important traits that arose only once. True wood, angiosperm xylem vessels, and Rubisco likely only evolved once and cannot be separated from phylogenetic origins. The conditions and the complexity of the trait did not lead to multiple origins, but instead served as the basis of radiations. Any trait that sits at the base of a tree cannot officially be considered an adaptation. Even if a trait had arisen twice, there would be no statistical basis for calling something an adaptation since it cannot be separated from phylogeny.
What are we left with then? We can apply phylogenetic corrections to account for relatedness when examining trait relationships, and it provides useful knowledge. But to what ultimate point if phylogenetic corrections will not ultimately rule out or in something as an adaptation.
It's currently a silent sticky point in our considerations of the evolution and ecology of plants. One to which I don't have a complete answer, but one of which would be helpful to have clearer consideration. In the end, we will likely determine how grasses differ from other species and why they come to dominate what we call grasslands. And when we do, it'd be nice to be able to recognize the adaptations of grasses for what they are.
Posted by JMC at 9:55 PM No comments: