Scientific culture: the hotter the fire, the stronger the steel

Scientific cultures can be difficult to define, but they separate the successful from the rest.

One aspect of successful scientific cultures is the way ideas are treated.

Anyone can get a paper published if they submit it to enough journals. Peer-review generally catches only the grossest of flaws. But crafting high-quality ideas takes intense scrutiny. Ideas have to be worked over again and again. Heated and pounded. Heated and pounded.

I remember back in 1991 reading a Scientific American article about Rene Jules Dubos. It was a brilliantly multi-faceted look a man's career. One part that stuck out was how ideas were treated:

"After a workday dedicated to experiments, colleagues would gather in Dubos's office...There, with feet on his desk and hands folded behind his head or pulling wisps of hair, Dubos would speculate on what the day's results suggested...Dubos's critiques caused much anguish among junior scientists --it was character building to see one's construction tumbled into a pile of bricks and then reassembled by Dubos into an architectonic masterpiece...Dubos's comments sharpened his associates' minds and influenced their careers...his penetrating insights and memorable presentations served to concentrate their attention on basic dilemmas..."

That short vignette characterizes the daily dedication to generating the heat of discussion. Ideas that emerge from those environments are strong.

Operationally, how does one systematically incorporate this into a culture.

First, always ask others what they think.

Peter King, columnist for Sports Illustrated, once wrote that Bill Belichick, coach of the Patriots, was well-known for asking people their opinion of what he should do. Even reporters. Why would one of the greatest coaches care what average people thought about plays or drafts? The idea was that you never know where good ideas come from.

Apply the Belichick principle again and again. At Berkeley, students were supposed to present at the lunchtime seminar 3 times in their career: when ideas were being formed, in the middle of the work, and then when it was being written up. Input is critical at all stages. And soliciting input is an active step.

Even weekly is not enough. Find new data, new ideas every day to discuss.

During these times, balance the anabolic and the catabolic. Dubos and his group would tear down and then build up and then tear down again. Of the day's discussions, it was said that "any exciting lead formed the base of an inverted pyramid of heady speculation, which often as not collapse the next day".

I've seen smart, able researchers fail because of a poor culture. The failure might not be recognizable to the outside, but often when you read the final work, often the conclusions can quickly be dispatched. Data are acquired well, but the fire was never hot enough to form strong hypotheses or make the best conclusions.

And it's hard for any one person to generate enough heat by themselves. People have to come together to do this.

Proverbs: As iron sharpens iron, so one man sharpens another.

Hot fires creating strong steel is not a new idea.

The problem is heat can blister. Blades are found initially to be dull, weak.

But those institutions that can develop this aspect of scientific culture--those that can lean back, put their feet on the desk, and practice building up ideas and then tearing them down--produce the strongest, sharpest steely ideas.

On Sunday, once the NYT comes out of the blue bag, the first section I read is the business section.

The business section always has articles on things that in science we don't discuss--culture.

This past week it was David Segal's, aka The Haggler. He wasn't trying to extract an apology for someone's dishwasher not being fixed, but instead commenting on a business that was doing a good job.

The point of the piece was about fostering a culture that promotes good business practice. One of the executives was quoted as saying:

"If you don’t create a culture at your company, a culture will create itself...And it won’t be good. I sometimes hear people say ‘We don’t have a culture at our company.’ They have one. But if it hasn’t been nurtured, if no one has spent on any time on it, you can assume it’s the wrong culture."

Kendra and I talk about scientific culture a lot. We've seen so many bad cultural practices. And a fair number of good ones.

But you never read about scientific culture like you do business culture. What makes scientific teams work? What helps departments produce good students? It's just not discussed.

And bad scientific cultures develop in the absence of nurturing good ones.

So how does a good scientific culture work? Can it be represented with "-isms"?

K and I have a bunch of sayings that represent different parts of scientific culture for us.

They don't form a complete culture. These deserve more explanation, but I'll at least write the ones I can think of down.

1) Orals every day.
2) Question anything.
3) The hotter the fire, the stronger the steel.
4) Eyes on the horizon.
5) Leave space to grow.
6) Excellence without arrogance. Ignorance is the meter stick.
7) Common goals, flexible roles.
8) Weave progress.
9) Anabolic must balance catabolic.

Each one has a story.

Orals every day represents a rich environment with lots of questions. Like orals, but every day. We came up with this one in Minnesota.

Question anything means that anything should be fair to question. The most basic assumptions. A person's most cherished ideas. It also is phrased such that you don't question everything--that isn't productive.

There are still parts of the culture I'm not sure I have phrases for yet.

Like how to generate new ideas. They come from questioning basic assumptions (#2), discussing ideas to work through them (#3), and having a framework for larger goals (#4), for example. Yet, idea generation requires a creative, free-flowing environment. It's hard to crystallize that one.

Part of understanding alpha and beta diversity is the underlying differences in resource availability.

Beta diversity on N availability is difficult to assess.

Landscape ecology and geospatial statistics start to get at this, but they haven't been applied too broadly.

I was playing with the global foliar 15N data to try to see what the range in foliar 15N was for a given site.

It's not a perfect metric but informative. Again, there are a number of things that foliar del15N reflects, but essentially it's N availability, the form of N taken up by plants (under some circumstances), the depth of N, and the dependence on mycorrhizal fungi.

What does the relationship between number of samples from a site and the range in foliar 15N look like?

It's a logarithmic relationship, just like a species-area curve. 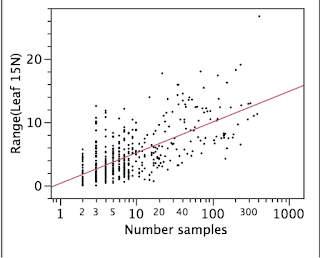 This isn't spatial per se, since this is generally number of plants. The spatial pattern is unknown.

But it's interesting to think about what this pattern reflects. For a given amount of sampling effort, you expect a certain range in foliar 15N. Measure 100 plants, and you expect a range of 10‰.

But what about the residuals? Why would some sites have a greater range? Why less?

What is it about the N cycle in those sites with a greater than expected range? Greater variation in disturbance? Partial nitrification allowing some plants to acquire NH4+ and others depleted NO3-?

The one point at the top of the graph? Konza. We sampled a lot of plants, but again there was a lot greater variation in 15N there than expected. And Konza has a lot of disturbance paired with undisturbed areas.

It'd be pretty fascinating to try to replicate this approach experimentally across ecosystems to better understand variation in N cycling characteristics across sites.