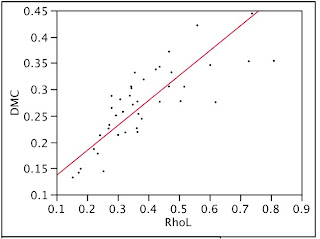 Relationship between leaf tissue density (RhoL) and leaf dry matter content (DMC) across 42 Konza grassland species.
There has been some debate on how best to represent plant investment into leaves. Specific leaf area, the ratio of area to mass, is at best an imperfect measure. Plants with high SLA certainly produce a lot of leaf area for minimum investment. Yet, high SLA can come as a result of being thin or low density. And it seems that many of the ecological conditions associated with high SLA are really associated with low tissue density rather than thin leaves.
How to measure tissue density is one of the current debates. On the one hand, tissue density (mass per unit volume) can be derived by measuring the thickness of leaves in addition to SLA. Deriving leaf tissue density (LTD) from thickness measurements provide a direct covariate (thickness) and are relatively simple to do. Yet, for some leaves, measuring the average thickness can be problematic. On the other hand, an approximation of tissue density can be derived from the leaf dry matter content (LDMC). Leaves are weighed in a hydrated state and then again dry. The ratio of dry mass to wet mass is LDMC. There are a number of assumptions to equate this ratio to leaf tissue density, but it has been favored.
Across 40+ species at Konza, I measured LTD and LDMC. The two metrics correlated pretty well (r = ~0.8). Some species seemed to have higher LTD than one would expect based on LDMC. In species with a high proportion of veins, thickness is probably underestimated, since it is generally measured between major veins. The Ambrosia artemisiifolia I selected was deeply lobed and did not have much lamina relative to veins. Its LTD was probably too high. On the other hand, both Bothriochloa and Schizachyrium species had higher LTD than expected from LDMC, but this likely would not have been caused by underestimating thickness or area. Instead, these species likely have high silica concentrations that add more mass per unit volume than other species. This is something I still need to confirm.
As to whether LTD or LDMC does a better job of predicting abundance, they both were about the same. Using long-term abundance data, they both had equal predictive power on average.
Whether one metric is better than another is likely equivocal. It depends on the situations as both have their limitations. I’d probably use both for awhile until better consensus can be reached.
I’m not sure I’ll get around to publishing these data, so I thought I’d put so of the results up here.
Posted by JMC at 1:07 PM No comments:

Stylized diagram of phenology of first flowering of different functional groups for Konza.
Global change models had often assumed categorical differences between C3 and C4 species. Because of the temperature sensitivity of photorespiration, C3 species are restricted to cooler seasons and C4 grasses to warmer seasons. The separation between C3 and C4 species, especially the grasses, was a standard categorization for plant functional types.
Yet, how much basis is there really for the separation? What role does photosynthetic pathway have to play in the phenology, if not ecology, of temperate grassland species?
At Konza, we’ve been collecting plant species when they begin to flower. It’s a rough estimate of phenology. It doesn’t capture how long they flower, or when leaves grow the most, but it’s an easily measured trait that represents phenology. We have first flowering dates for about 350 of Konza’s 550 herbaceous species.
Generalization #1: C3 grasses have an earlier phenology than the C4 grasses. The first grass to flower in 2010 was a C3 grass Poa pratensis on April 21. Yet the first C4 grass flowered just a week later. Bouteloua dactyloides flowered on April 27. Tripsacum dactyloides, another C4 grass, was just a day later—April 28. There really is little offset between C3 and C4 grasses in when they start to flower.
Generalization #2. The C3 photosynthetic pathway restricts the activity of C3 species when temperatures are high in comparison to C4 species. It is true that C4 grasses do flower later than C3 grasses. The last C3 grass to start flowering was Diarrhena obovata, a forest understory grass. It didn’t flower until June 28. Many C4 grasses do not begin to flower until July or August, when midday temperatures are routinely 30°C. Yet, C3 forbs also flower during the time when only C4 grasses are flowering. For example, Helianthus maximiliani will not flower until the first week of August.
At this point, I have a few questions.
If C4 grasses can flower as early as C3 grasses, and C3 forbs can be active during the time when C4 species should have a physiological advantage, then what are the links between photosynthetic pathway and phenology?
How much of phenology is driven by phylogeny rather than photosynthetic pathway? The Andropogoneae C4's flower mid-season, but not the Chloridoid C4's.
Why do C3 grasses not flower during the middle of the summer, while C3 forbs do? Can C3 forbs regulate their leaf temperature via transpiration to reduce photorespiration?
And why the offset for C3 and C4 grasses, if C3 species can flower mid-season? Is this an example of niche conservatism?
The topic of whole-flora analyses of phenology is complex, but some of these patterns seem clear enough to rethink some generalizations--even if they shouldn't happen based on what we know.
Posted by JMC at 7:23 AM 1 comment: