Our manuscript on soil N isotopes is being revised for Nature Geoscience.

The paper is important because it reinterprets global patterns of N isotopes, which are the main line of evidence that supports that tropical ecosystems lose a greater proportion of N to the atmosphere than temperate ecosystems.

That might seem like a slight accounting correction, but tied up in all of this are calculations of N fluxes to the atmosphere and descriptions of global patterns of nutrient limitation.

Are tropical ecosystems inherently less N limited than temperate ecosystems? One line of reasoning is that N-limited ecosystems would lose relatively little N to the atmosphere. So, knowing how much N is being lost to the atmosphere as opposed hydrologically is important.

One challenge with this revision is really convincing reviewers that it is exciting. Sometimes reviewers use this line as a non-arguable rationale to reject, but sometimes you have to make the implications of the paper clearer.

One thing I'm playing with is showing the latitudinal patterns of fractions of N lost to the atmosphere derived from soil N isotopes.

Straight-up, the latitudinal pattern in soil 15N looks something like this. 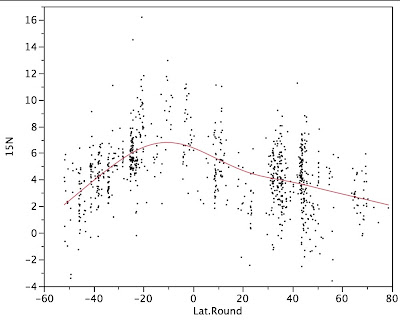 Peak soil 15N is a bit south of the equator.

These patterns are mirrored by the amount of C in the soil. 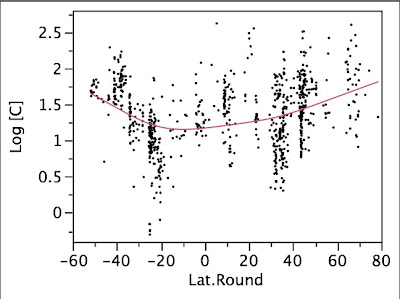 In all, when you correct for differences in soil C, clay, and depth of soil measured, the remaining pattern of 15N would look something like this: 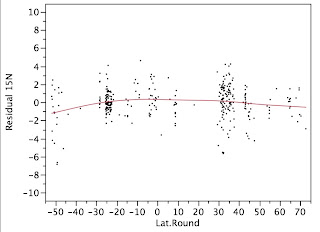 Not much signal left with latitude.

I need some more sophisticated ways to show this, but the basic idea would hold. Don't correct soil 15N for degree of processing by microbes and you think that the tropics lose more N to the atmosphere.

Acknowledge that tropical soils have SOM that has undergone a greater degree of processing and there is more clay there to hold onto highly-processed organic matter, and you think that tropical and temperate ecosystems lose similar amounts of N.

Maybe something like these graphs will make the findings a bit more exciting.