Co-limitation by water and nitrogen 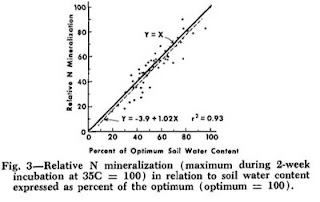 Resource limitation is one of the great driving factors that structure ecosystem function and ultimately the evolution of species. Yet, rarely should only one resource be limiting to plants. As I outline in RSWP, co-limitation should be the rule rather than exception. Yet, the paradigm shift in our understanding of limitation is still developing.

One of the most important dual limitations to plants is between water and nitrogen. In many ecosystems, increases in biomass are observed when nitrogen is added as well as water. Yet, why would these two resources co-limit production? For example at Konza Prairie, ANPP frequently responds to water addition and is greater in wetter years. In addition, ANPP increases with N fertilization. Mechanistically, how can this be?

One reason why co-limitation occurs is because of acquisition tradeoffs—allocating resources to acquire one resource does not also lead to the acquisition of the other. Their costs are separate. For example, CO2 and water can co-limit because of their spatial separation in acquisition as well as their direct tradeoff in photosynthesis. Yet, generally the same unit of root can acquire both water and nitrogen as they are coincident in the soil.

Co-limitation can also arise when gain or loss rates from the ecosystem are co-dependent on the resources’ availability, causing the resources to be supplied at the same ratio demanded by plants. For example, N and P will often co-limit production because N is more likely to be lost from the soil when P is limiting. When the ratios of supplies and demand match, increases in productivity occur only when both resources are added, not each individually (see Figure 4.2 in RSWP). Yet, the pattern of co-limitation for water and N just doesn’t support this. Productivity generally responds to the addition of each, not just both. Although N2-fixation might be more likely when soils are wet, which bring supply and demand ratios closer,  N loss can also be greater when soils are wet (dentification, leaching). Plus, N loss is not more likely when soils are dry.

If these two main reasons do not apply, why do N and water frequently co-limit production? The secret might lie in the figure at the top of the post. 35 years ago, researchers incubated a number of soils at a range of soil moistures. They found that N mineralization typically was highest at some high soil moisture. As soil moisture declined, N mineralization declined linearly.

These might be old data, but the consequences are still amazing, even today. For example, if soil moisture declines from 80% water-filled pore space to 70%, which is still a lot of water for any plant, N mineralization would decline by 12%. Add that water back and N mineralization increases. If this is the case, then when it rains or an area is irrigated, N-limited plants would see an increase in productivity without ever being directly limited by water.

There is other evidence that water might not be directly limiting to productivity, but seem to be. For example, there is the curious observation that there is often plenty of water in the soil for seemingly water-limited plants right below their lowest roots. Dave Wedin noticed that in the Sandhills of Nebraska, there is often plenty of water right below the roots of the C4 grasses, which extend only 25 cm deep. Turns out same thing happens in Konza. These plants can easily produce roots deeper than they do, they just don’t. Why? Because all the soil organic matter is in the top of the soil profile. The water below that zone is of no use to the plants. By the time the shallow soils dry out, no N is being mineralized for the deeper water to be useful.

There are a number of other questions that need to be answered about co-limitation between N and water. Certainly soils can dry out to the point where neither water nor N is available to plants. How often does this occur and are there cross-overs where water becomes more limiting than N? Also, if deep water is available to plants, why don’t they lift it up to shallow soils to increase N mineralization?

Figure from: Stanford, G. and E. Epstein. 1974. Nitrogen mineralization-water relations in soils. Soil Science Society of America Journal 38:103-107.
Posted by JMC at 5:05 AM