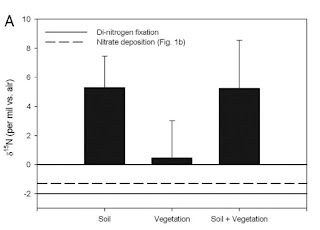 Average del15N of all the soil and vegetation in the world.
Ben Houlton and Edith Bai have a new paper in PNAS about the nitrogen cycle that has some good sleuthing in it.

Examining global patterns of soil and plant 15N, it turns out the 15N signature of all the N in non-managed ecosystems is about +5‰. But why +5 if naturally fixed N is about 0‰? They rule out enrichment from N deposited as NO3-, which averages about -2 to 0. And terrestrial systems aren’t becoming enriched because of fractionation during leaching out the bottom-- N being leached into streams scales with soil 15N pretty well.

What’s left to explain the enrichment? Just gaseous N loss. They argue its unlikely NH3 volatilization since its too reactive and gets redeposited too quick. With that ruled out, all that’s left is denitrification, which here includes losses during nitrification.

From here, its some simple back of the envelope calculations to estimate the total gaseous N loss on a global scale, which happens to be a lot.

The authors aren’t clear about where the largest uncertainties in their calculations are, but global patterns of soil 15N and fixation likely are pretty high up there. Also, considering that soil 15N is pretty close to zero in cold ecosystems, that leaves the warm ecosystems as the major players in the global N fluxes, which happen to be the places that we know the least about patterns of 15N.

Sounds like now is the hard part. Because if the world turns out to be +6 or +4, the budget changes a lot.
Houlton, B. Z. and E. Bai. 2009. Imprint of denitrifying bacteria on the global terrestrial biosphere. Proceedings of the National Academy of Sciences of the United States of America 106:21713-21716.
Posted by JMC at 7:51 PM