One of the developing trends in functional traits is moving away from traits associated with general stress tolerance syndromes to traits that directly are associated with tolerances of low availability of specific resources.

There has been a lot of work to determine the leaf economic spectrum, for example. Yet, the LES separates fast- and slow-growing species in essence without separating the specific resources that have driven the evolution of the slow-growing species.

For example, drought, shade, and low nutrient availability are all supposed to be associated with the traits on slow-return portion of the LES. Therefore, at its best, the LES would not separate out whether species were adapted to drought or shade, if they aren't adapted to both.

A hopeful trend has been measuring drought-tolerance or shade-tolerance directly. Tolerance of low nutrient availability/competitive ability when nutrients are limiting, not so much, but that might change yet.

Mel Tyree and Tom Kursar's work for tropical species is a good example. Their approach is to let tropical tree seedlings grown in pots wilt and then measure the water potential of plants that are severely wilted. Similar to psi-crit that I've measured.

When you do that, you get a range of drought tolerances: 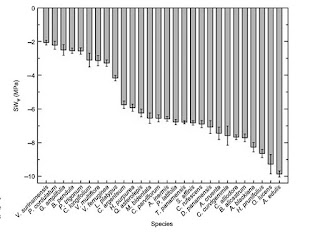 They've used this pretty successfully to explain patterns of diversity in dry and wet tropical forests.

Again, this is a hopeful trend that should bear fruit in the near future.