What I read over spring break: The Hockey Stick and the Climate Wars 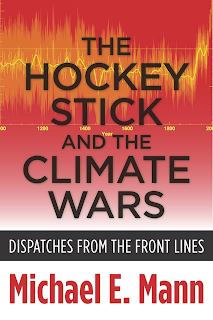 "Skepticism is the lazy man's consolation, since it showed the ignorant to be as wise as the reputed men of learning.--Bertrand Russell"

In short, the book chronicles Michael Mann's scientific career and involvement in the politics of climate issues as a scientist. It's a humble, even-keel telling.

For some, the book will be a revelation about organized attempts to dismiss scientific work. It's a fair reason to read the book.

As a history of a debate, it could be construed as one-sided. But isn't any autobiography a one-sided take on history? It can be dense, but is there a light way to describe PCA?

I appreciated the tour of paleoclimatology as well as the political theatre. Snippets I had read about are brought together well into a sound timeline. Scientifically, I would have liked to see more graphs, to be honest.

Not much else to say here about Michael Mann's book, except I've ordered copies for friends. As scientists, likely few of us could have withstood the pressure as well as he had, no less chronicled it as cleanly.