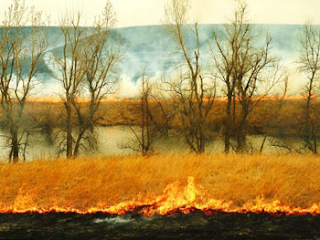 Fire is an integral part of ecosystems especially grasslands and savannas. Many of these ecosystems burn regularly. And shutting off fire radically alters their dynamics.

Some of fires impacts on ecosystems are direct. Fire directly removes biomass and kills some plants.

But the impacts on other factors, like soil moisture, are relatively indirect. Fire evaporates some water directly, but its influence on soil moisture occurs by impacting community composition, litter layers, or nutrient availability.

For example, the removal of litter layers by fire can either lead to net increases or decreases in soil moisture. On the one hand, litter layers decrease evaporation and transpiration, but they also intercept precipitation from reaching the soil.

At Konza, Jesse Nippert and I went through 28 years of soil moisture data from an annually burned watershed and another that had prescribed fire shut off (except one wildfire in 1991).

Examining biweekly soil moisture over 28 years is pretty amazing. I'm not sure there is a long-term dataset like this anywhere in the world.

What happens to soil moisture when you shut off fire for 27 of the 28 years? Do the soils get wetter or drier? Do plants become more water stressed or less?

Turns out it depends on how long after fire gets shut off.


In the short-term, litter from the dead grasses accumulates and soil moisture is less depleted most likely due to reduced evaporation and transpiration.

But in the long-term, wood species move in and they start to draw down soil moisture levels. Especially in the deeper soil profiles.

So, in the end, shutting off fire keeps soils wetter in the short-term, but dries soils long-term.