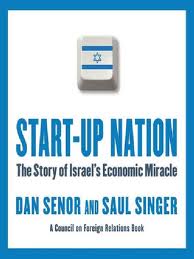 In a typical airport bookstore, the shelves are populated with books on the culture of business. Business culture is discussed explicitly and frequently.

In the sciences, there is little discussion of the culture of science. Books are devoted to analyzing the cultures developed by CEO’s, but we do not turn the same lens to scientists.

In part, our disciplines are small. Everyone is an insider. We have few outsiders or gadflies that can take a dispassionate look at the topic. You may hear whispers about someone having “So many resources, so few insights”, but it rarely extends beyond that.

Scientific culture is important. As important in the end than statistics. But there are no books devoted to this.

So, I read business books occasionally.

The most recent one is Startup Nation by Dan Senor and Saul Singer. The authors seek to understand the business success of not a single company but a nation: Israel. Despite a scarcity of resources, an inability to trade with neighbors, and constant threat of war, for the past decade, Israel has produced a disproportionate fraction of the world’s startup companies and attracts an amazing fraction of the world’s startup capital. Almost all of the major tech companies have R&D labs here now.

Not too long ago, this wasn't even close to true.

The authors tried to understand why this is.

In the end, the authors elevate the importance of the Israeli culture as it applies to business.  That's where it gets interesting for intellectual arbitrage. Here are some of the cultural traits they emphasize...

2) Flat hierarchies. There are fewer levels between the top and the bottom. Leaders even at the highest political offices are known more by their nicknames than titles. Merit and ability overrides age and position.

3) Fearlessness. There were different Hebrew words applied to different aspects of this, such as chutzpah, but the generalities hold. Everyone has a fearlessness to try something new. Failure is not a stigma if something can be learned from it.

4) Early leadership. Military service is compulsory. The number of 23-year olds that have led military missions or commanded groups is high.

6) Connections. The authors frequently mention that for one reason or another, “Everyone knows everyone.” Connections are frequent enough so that there is almost know such thing as a cold call.
Let’s stop with these six attributes. How frequently do the most successful people or labs or institutions hold these? What can we do as scientists to promote them? Do we hire people that are fearless and have less respect for tenure than merit? Do we ask students to test our ideas or work on our experiments as opposed to their own ideas and experiments? How much resource do we put into fostering connections among people?

In the end, the book was really a fascinating look into the history of the Israeli economy.

Even better, there might be some food for thought on starting science up again.