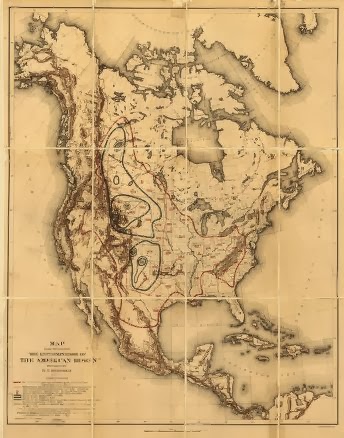 Reading William Hornaday's 1889 The Extermination of the American Bison../

It's a powerful book.

To me, it's like reading Weaver's account of the Great Plains, before, during, and after the Great Drought. Both transcribed the last vestiges in amazing detail.

The first European description of bison:
"among which the greatest Rarity was the Mexican Bull; a wonderful composition of divers Animals. It has crooked Shoulders, with a Bunch on its Back like a Camel; its Flanks dry, its Tail large, and its Neck cover'd with Hair like a Lion. It is cloven footed, its Head armed like that of a Bull, which it resembles in Fierceness, with no less strength and Agility"

Sex segregation:
We were much surprised at sometimes meeting innumerable herds of bulls without a single cow,
and other herds of cows without bulls.”

Migration:
"So long as the bison held undisputed possession of the great plains his migratory habits were as above—regular, general, and on a scale that was truly grand. The herds that wintered in Texas, the Indian Territory, and New Mexico probably spent their summers in Nebraska, southwestern Dakota, and Wyoming. The winter herds of northern Colorado, Wyoming, Nebraska, and southern Dakota went to northern Dakota and Montana, while the great Montana herds spent the summer on the Grand Coteau des Prairies lying between the Saskatchewan and the Missouri. "

On toughness:
"A buffalo can weather storms and outlive hunger and cold which would kill any domestic steer that ever lived."

The extermination:
"Such was the end of the great southern herd. In 1871 it contained certainly no fewer than three million buffaloes, and by the beginning of 1875 its existence as a herd had utterly ceased, and nothing but scattered, fugitive bands remained."