I had a conversation with a prominent cattle rancher in town the other day. I asked him if he had followed any of the news on the recent research out of K-State on the timing of burning.

He said he had.

I asked him what he thought of it.

He said in his gravelly voice, "I think it's a bunch of bullshit."

When I asked him why, he said that if you burn early, everyone knows that the soils will dry out. With less litter, there will be more evaporation and less rainfall will enter the ground because more will run off. You are going to get less productivity.

He didn't know that I had helped write the paper, which was just fine. I got more honest answers than I would have otherwise.

I explained to him that having litter on the ground often reduces how much rain enters the ground--canopy interception creates a dispersed puddle that can evaporate before wetting the soil.

I also explained that there was never any strong evidence that soil moisture was lower when you burned early.

The only data on that are from 50 years ago and were never done in a manner that was scientifically rigorous enough to be definitive.

The data were taken with neutron probes, which is a fine technique, but there was confoundment between treatments and sites.

When you look at the data, the data suggest that early-burned grasslands have less soil moisture than late-burned watersheds. 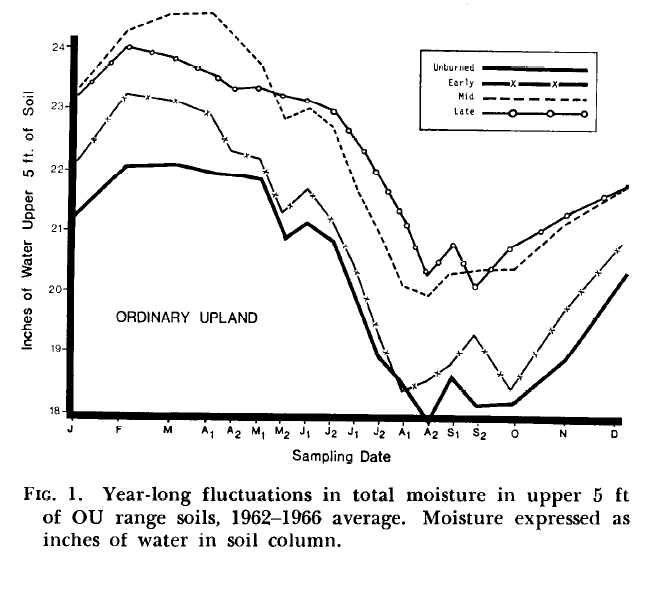 But, a couple things are suspect with the data.

First, over the winter, soils should recharge so that they are wet throughout the soil profile regardless of the treatment. But, December and January soil moistures are already an inch lower in the early burns.

This is more likely due to that site just happening to be able to hold less water.

Second, if litter is important for holding soil moisture in, unburned soils should be wettest. They are the driest.

Third, the rate of decline of soil moisture during the growing season for the different treatments are almost exactly the same. When does the differential drying occur? This likely means they are using soil water at the same rate.

Fourth, let's say that data are correct and there is an inch less of water in the top five feet of soil.

How much of an effect would that have on production?

What was the "effect" in the experiment of a having 1 inch less of soil moisture in the soil profile?

Typical rainfall use efficiencies would predict a reduction of productivity of 7-8 g m-2 or 75 lbs/acre.

That's over an order of magnitude too much.

In all, that's really the only data out there that is used to support greater drying in early-burned grasslands.

The rancher's response to these highlights?

Something to the effect of "Regardless of what the data say, I trust what other ranchers say they've seen."

Even though none of those ranchers would have ever seen a grassland that was burned in the fall for 20 years straight...

Insularity can be hard to break...