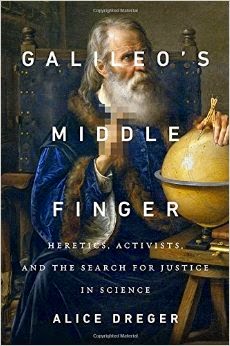 There aren't too many books that would have blurbs on its cover from both Dan Savage and E. O. Wilson. This is probably the only one. And I've never read a book like it.

Dreger is a science historian. The book has really little to do with Galileo**. It is mostly a memoir of her battles as a historian and activist over scientific issues.

**The short introduction on Galileo is still an important read. Dreger uses it to anchor the importance of evidence-based evaluation. Galileo once got into a discussion of whether ancient Babylonians could cook an egg by twirling it around in a sling. His uniformitarian response? "If we do not achieve an effect which others formerly achieved, it must be that in our operations we lack something which was the cause of this effect succeeding, and if we lack but one single thing, then this alone can be the cause. Now we do not lack eggs, of slings, or sturdy fellows to whirl them; and still they do not cook, but rather they cool down faster if hot. And since nothing is lacking to us except being Babylonians, then being Babylonians is the cause of the eggs hardening…"

Dreger has been a pivotal player in a number of battles over the science of sex and related social justice. Hermaphrodism, genital mutilation of intersex babies, defining transgender, hormonal therapy for embryos...she was in the thick of it. Add to that debates over sociobiology, attacks on scientists for research on rape, and homosexuality in animals. She was involved.

All within 10 years by my count.

These stories are not easy reads. These are stories of the role in science in influencing what often become life and death decisions. And the attacks on the scientists (and her) attempting to collect evidence on the issues are ferocious. She chronicles it well.

Somehow, the book ends on a hopeful note. Evidence comes to light. Positions are changed. Careers are restored. The importance of academia is reaffirmed.