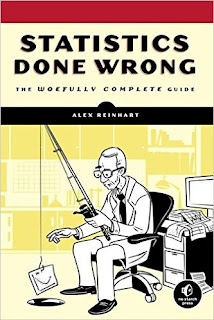 How to Lie with Statistics came out in 1954. It has long been considered a classic with over a half-million copies sold.

The second edition of Statistics Done Wrong might be a true successor to the classic. The first edition, recently released, is still a good read for any scientist.

The author, Alex Reinhart, spends covers some basics about statistics and then empirical cases where statistics have been used incorrectly.

It's a good book. I learned a few things while reading it and was impressed to see that important examples from recent news were included as cautionary tales. I think most scientists should spend the time to read through this. If they don't learn anything, they should at least feel good about that. My guess is that they would.

That said, the difficulty with the book is that it isn't mature yet. The section on p-values is probably the most important, but I finished the section not quite sure what the author wanted to impress upon the reader. The reader is admonished to use ranges instead of p-values, but it just isn't clear why. As the book matures, the author should have better examples to get his points across. In contrast, his examples for base rate fallacies were mature. They were poignant and the reader should have a clear idea how to calculate what percentage of positives are likely false.

Another problem with any statistics book is that statistics is too broad to be covered in any thin volume no more than a single book could cover how to lie with language.

At any rate, Statistics Done Wrong is an admirable effort. At the very least it should set off alarm bells with researchers to ask questions about their statistics a little more deeply.

I'm looking forward to seeing what the second edition holds.