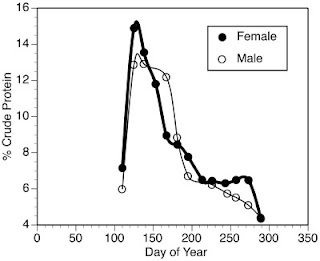 Forage crude protein concentrations (%N * 6.25) for male and female bison over the season from Konza.

Bison are the largest native grazers in North America left. Their history is interesting, having almost gone extinct with the Pleistocene megafauna, and not having evolved into their modern form until about six to eight thousand years ago. Most of the attention on the evolution of the animals has been regarding changes in their morphology. Most of the attention to the modern animals has been their genetics and the introgression of cattle genes—finding “pure” bison. Most of the interest in their modern ecology has been on their role as a keystone in ecosystems.

Almost entirely missing from the study of modern bison has been their nutrition. There has been some work on diet—do they eat forbs or grasses; cool- or warm-season grasses. Yet, animals that ranged throughout North America and never had access to grasses like the progenitors of modern cattle would have found in northern Europe would likely face strong nutritional stress throughout much of the year. The adaptations of bison to low forage quality, no less the basic patterns of the availability of energy and protein to bison have gone all but unasked.

At Konza, Gene Towne has been collecting fecal material throughout 2009. Every two weeks, he has collected fresh pies from both males and females. Then we send the samples off to Texas A&M’s GANLab to see what the crude protein (nitrogen) and digestible organic matter (energy) was of the grass that they were eating.

If you look at the patterns from 2009, a few fascinating patterns stand out. First, the minimum protein requirements for mass gain for cattle are about 6% crude protein. Bison at Konza have about 100 day window to gain mass during the growing season. After that, there is little protein available beyond what is required for maintenance.

Second, the differences between males and females has never been observed before. Males tend to form “bachelor” herds and do their own thing until the rut—roughly August. After that, they often go off on their own again. The CP patterns show that the males are not selecting as high a quality forage early in the season, but the peak is broader. During the rut, quality is about the same as females. Afterwards, the males are selecting lower quality forage than the females. Why? Why wouldn’t the males feed in the same places on the higher forage quality. A mystery right now.

Lastly, by mid-October, CP had dropped to roughly 4.5%. Not much good green out there for anyone. Gene’s found that the bison lose about 10% of their weight during the winter, which can be up to 200 pounds for the large males. We’re beginning to see why.

Hopefully, data like this will continue to be taken at Konza for a couple of years. It’ll be fascinating to see the differences between wet and dry years on forage quality. With any luck, we can start similar measurements at a number of other TNC sites with bison to being broader comparisons.