I haven't seen too many reviews of drought tolerance/cavitation resistance of grasses, but it is generally thought that permanent wilting points for most grasses is about -3MPa. It isn't considered that too many plants can resist below -10 MPa. Why -10 MPa? Because the machines to measure water potential don't go below there.

In the past few weeks, I've continued to measure the drought tolerance of grasses from across the world.
As the species have accumulated, the same tradeoff boundary observed earlier appears to hold. Yet, over 10% of the species appear to be able to conduct water at pressures below -10 MPa. For reference, if you could graft any of these species on the top of the tallest redwood, they could still conduct water.

We still need to nail down the actual psi-crits for the species. The problem is that our pressure bomb stops at -10MPa (100 bar). 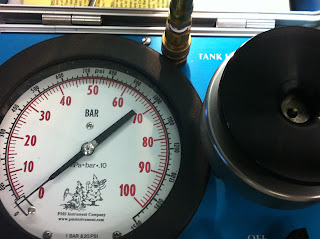 The good news is that Jeff Hamel at PMS has been kind enough to build one that goes to -14MPa, which should allow us to determine the drought tolerance of the most drought-tolerant grasses. We'll grow up these species again and let them dry down. Hopefully, Jeff won't have to build one that goes below -14 MPa.
Posted by JMC at 7:41 PM