Grasses of the world III--grasses can be incredibly drought tolerant

I've posted that I've been growing up 500 grass species from around the world to look at the geographic and phylogenetic distribution of physiological drought tolerance. Before we learned we were a bit constrained in quantifying the drought tolerance of grasses because we had grasses that could withstand pressures in excess of our previous pressure bomb, which maxed out at 10 MPa (~1450 psi). Jeff Hamel at PMS Instruments sent us one that goes to 14 MPa (~2000 psi). With that, we've rerun some grasses and measured some new ones, while we wait for some others to grow from seed again.

Still, the first results show that there are grasses that are incredibly drought tolerant.

We've now measured physiological drought tolerance (psi-crit) on 398 species. 13 of those were able to conduct water at pressures in excess of -14 MPa. That's more than 3% of the grasses we surveyed. 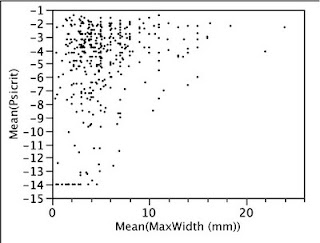 3% does not seem like a large number, but that number will only go up as we measure the most drought-tolerant species which are regrowing. 5% might not seem that high, but that'd be 500 species of grasses in the world if you extrapolate out.
How drought tolerant could some of these species be? If you extrapolate out the lower bound of the width-psicrit relationship, we should have some that hit -17 MPa (~2500 psi).
Posted by JMC at 6:44 AM