Soil C patterns in the US (and world) 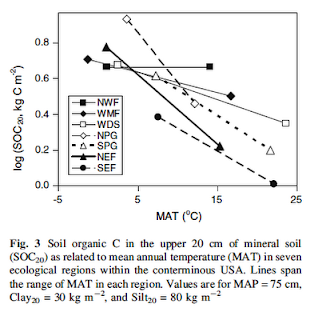 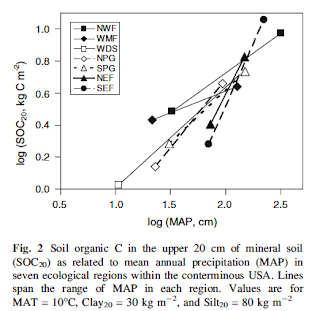 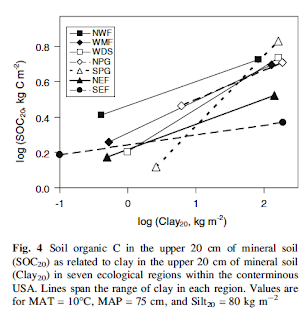 When working with the global soil 15N database, we put together global relationships between soil C and climate as well as texture.

I hadn't seen this put together before, but it turns out they were for the US.

The first paper on this was from Guo et al. 2006 in SSSAJ. The second one was by Homann et al. in 2007 in Biogeochemistry.

I think the Homann paper does a better job of showing relationships than Guo, though neither would necessarily be ready for a text book. The both try to show too much of the dependency rather than the generality.

In short, the authors use data on soils from across the US that had been compiled earlier. Examining the patterns region by region, They then show that clayey soils from wet, cold have higher total C in the top 20 cm (mineral soils) than sandy soils from hot, dry sites.

At some point, someone needs to do a better job of showing this so the figures can get into textbooks.

That said, the basic patterns that we see with our global database match pretty well with the US patterns.

For example, from 5 to 15°C, soil C concentrations declines by roughly 50% in the global dataset, which is pretty similar to what Homann saw for US regions.

Differences can be hashed over, but the global patterns with our somewhat ad hoc data [it was put together for other reasons that soil C] seem to be pretty robust.

Something like what is directly above needs to be in a textbook...