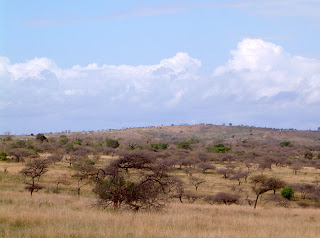 One of the great scientific pleasures of my career has been to have a conversation with William Bond.** I write "a" conversation because since I met him in New Zealand in 2001 it feels like we've  had one, long discussion revolving around one topic.


**William was just elected to the US National Academy of Sciences. It is well deserved.


The conversation can be summed up as "Why do grasslands exist?"

Asking why any one species evolved is difficult. There's too much stochasticity in that. It seems like it should be easier to understand why an entire biome exists.

When you look at modern grasslands climatically, they occupy a climatic region between deserts and forests, but essentially anywhere you have grasslands, you can have forests. Or at least ecosystems dominated by woody species.

They don't occupy a fertility niche. There are low- and high-fertility grasslands.

Some would refer to grasslands and forests as alternative stable states. William refers to them as uncertain ecosystems. It is uncertain whether you would have grasslands or forests at a particular site.

Grasslands and forests are certainly alternatives, but are they stable? And if so, why.

The questions about grasslands always circle back to the same questions.

What are the factors that lead to long-term persistence of grasslands? You can have grasslands for millions of years in the same spot. But how? Once grasslands are established, what are the positive feedbacks that maintain grasslands? And do they become even stronger with time?

If the two can switch back and forth, something must be responsible for reducing the abundance of woody species initially. These are generally disturbances.

But what disturbances are required to maintain grasslands? Fire? Drought? Herbivory?

And what are the roles of chronic stresses in maintaining grasslands?

The trick on all of this is to understand the stability of grasslands.

It seems like if grasslands only required disturbances to maintain grasslands, there should be enough variability in disturbances among years to cause grasslands to occasionally "flip" over to forests.

What else keeps the abundance of woody species low?

For example, one under-appreciated issue is propagule pressure. When you maintain large expanses of grasslands for long periods of time, times without disturbance won't flip to grasslands to forests if there are no forest tree seeds coming in.

It seems like there is another factor out there that we don't understand. Nutrients are certainly a factor, but likely no the defining one. Water? Likely based on the climatic envelopes. But how? Is it annual dryness? Is it low water potentials directly? Or the disturbances that come with dryness?

CO2 is the one resource that we understand the least. Grasslands arose during periods of low CO2. When CO2 levels drought, carbon becomes more expensive. Woody species need excess C for wood; grasses use minerals to help build structure. Excess C can also be used for secondary compounds like tannins, which grasses rarely use. Low CO2 favors species with C4 photosynthetic pathways--almost half of the grasses are C4. Low CO2 increases water loss from plants, which can exacerbate water stress and reduce C availability that can aid in C starvation once plants close stomata.

When we think about low water availability, we picture drought-tolerant species such as cacti or chaparral. When think low light, shade-tolerant species are easy to picture. Low nutrients? Low-nutrient plants are well-known.

Low CO2 plants? Who is on the poster?

If grasses should be placed on the poster, CO2 might be the missing link that explains the long-term stability of grasslands.

Disturbances + intermediate precipitation + low CO2 might be the ultimate formula for the grassland biome.

Before that's certain, we need to update our understanding of alternative stable states. The experiments that are needed to confirm this will not be simple.

More importantly, if grasses are low-CO2 plants, we might be about to lose a lot of grasslands, regardless of how much drought or fire or herbivory we push through those systems.

A lot of work remains to make grasslands certain ecosystems.