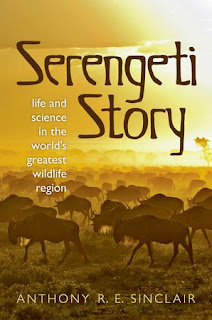 I'm on holiday in the Inner Hebrides now. 56°N, but the warm oceanic currents allow palm trees to grow outside my window. With sheep and cattle grazing the hillsides and valleys, this feels about as far as you can get from the Serengeti.

Last year, Tony Sinclair published his book, Serengeti Story. A friend at the BBC had the book on her shelf and she let me take it with her as we left Oxford. A couple of train rides, one ferry ride, and a few long-day nights later, I had finished it.

The book was surprising. I had expected a typical late-career summary of research. Not this book. You do read how Sinclair’s scientific thinking changed over time. He came to the Serengeti as a student to study birds, but then slowly worked through a series of questions regarding the regulations of the herbivore populations there. If you keep your index finger in the appendix and read the endnotes in parallel, a more detailed scientific story emerges.

If that’s not the book, then what is it about?

Think of a state factor approach to herbivore populations. In the Serengeti, wildebeest numbers are driven by climate; herbivore competitors, predation and disease; the topography; and the soils. But over the past 200 years, humans have probably had a greater impact on them than anything.

If you ever wondered how humans could impact a million grazers, this is where the book is a gem.

Political turmoil between Tanzania and Kenya leads to lawlessness which encourages poaching.

Fences, roads, climate change all have the potential to further strain the system.

Sinclair includes a number of side stories about his time there. At first they seem a bit off-putting. They might be good fun around a campfire or at the bar, but seem like a digression for a serious work.

But, page after page, year after year, you see just how hard collecting basic data on population sizes are. First hyenas try to eat you after your vehicle is stranded. Then you get attacked by buffalo. Then lions. Leopards learn to jump through roofs to eat people. Then bandits become bold and attack with poison darts. Then they get rifles. You have to smuggle fuel for your airplane. Fix flats with bandaids so you don’t get eaten or shot.

Ecosystems are complex. The human element makes them more complex. Sinclair does an excellent job laying out the complexity of decades factors that determine the fates of wildlife.

We often do not see how hard it is to collect the ecological data that shows some of this. Like how many wildebeest are in a park.

The book helps you appreciate how hard the job can be.