GD3D: Grass and Drought in 3 Dimensions 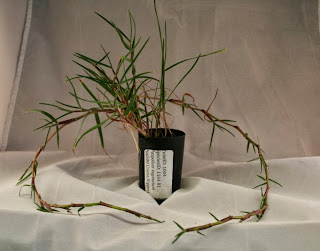 We just found out a bit ago that NSF is funding us** for a Dimensions of Biodiversity grant on grasses and drought.

Overall, the GD3D project will be an ambitious attempt to weave together multiple dimensions of understanding about drought and grasslands. We'll tackle their genetics, phylogeny, and function in parallel.

Over the next 3 years, we’ll set out to do a few things:
--The most advanced phylogenetic reconstruction of the grass phylogeny ever.
--The first global comparison of the anatomical adaptations to drought
--Examine the genetics of how grasses have evolved to respond to drought.
--Feed the findings into global models of ecosystem function to predict how grasslands around the world will respond to an increased severity and frequency of droughts.

At the heart of the project is to grow a lot of plants. We might shoot for 1000 species of grass, which is almost 10% of the world’s grass flora.

There are a lot of interesting questions that we’ll tackle here—I’m curious about whether we can measure a thousand species—but the grandest questions are the costs of drought tolerance.

Why aren’t all grass species tolerant of drought?

What tradeoffs did grasses face in developing drought tolerance?

Thinking about the story of grass evolution, grasses started in the shade and began to move out into open environments. Some of the adaptations they had to a life beneath trees would have been liabilities out in the open.

Grasses likely would have had to have lost their tolerance of shade before “grasslands” could emerge.
The tradeoffs between shade and sun, wet and dry are the most interesting in understanding what shaped the radiation of grasses.

Grow plants.
Stop watering them.
Measure their water potential when they stop transpiring.

The tricky thing on this is actually shade tolerance. We know that physiologically drought tolerant grasses do not have wide leaves and species found in the understory tend to have wider leaves, but that's about it. Determining minimum light levels for growth has really never been done before.

It seems like it should be straightforward, but differences in minimum light levels are more subtle than we thought. And it's tricky to generate even shade--light from the side messes things up.**

**Note to self: cover the walls of the growth chamber with black paper to reduce reflections.

We'll see if we can tackle this question on the side, but it's a broad canvas waiting to be painted.

In the meantime, there is a lot to learn about drought itself.