Trees in colder environments are less tolerant of shade 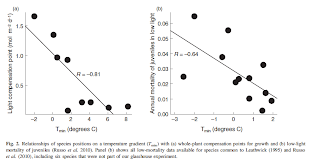 Nice paper from Chris Lusk et al. They grew 17 NZ tree species in the glasshouse. Species that grew in places with colder winters had narrower vessels and lower conductance of water.

Whether there is a direct tradeoff between cold-tolerance and shade-tolerance, or an indirect set of relationships is still to be worked out.