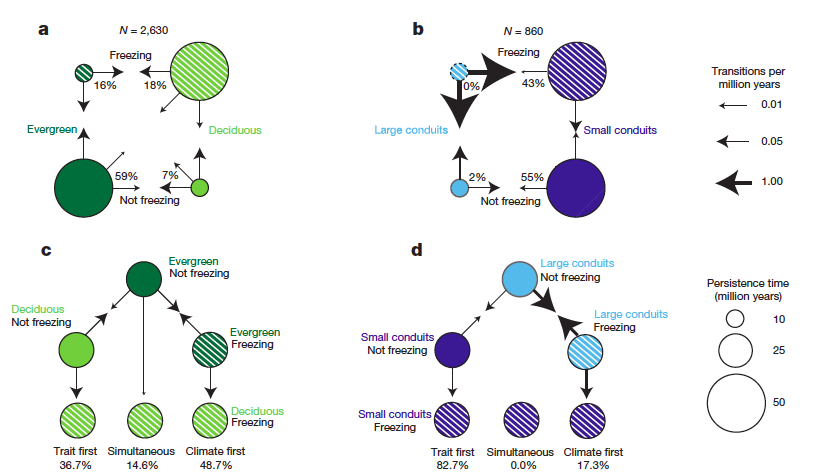 The ancestral plant was woody, evergreen, had large vessels, and lived in warm habitats.

Over time, trees radiated into cold environments by becoming herbaceous, deciduous, or having small vessels that are less likely to cavitate with freezing.

To understand the order of all this, the authors co-analyzed phylogenetic patterns of climate occupancy, woodiness, and vessel size for a large number of species.

The time-scaled molecular phylogeny is a key innovation with this work, but joining the databases on traits hasn't been done either.

The main finding is that the main adaptations to freezing evolved before moving into cold environments: "freezing environments were largely filled by lineages that had already become herbs
or...already had small conduits".

Deciduousness is the exception: "most deciduous woody lineages had an evolutionary shift to seasonally shedding their leaves only after exposure to freezing". Think live oaks to deciduous oaks.

The trailing question is what drove pre-adaptations to freezing. Was it drought? Nutrient limitation?

An independent dataset on these traits should help answer these questions.

In all, nice paper by Zanne et al. in Nature.

[Note on sample size for myself, if I read right, there were data on growth habit for 39k species, climate and phylogenetic for 32k species, leaf phenology (evergreen vs. deciduous) for 2630 species and xylem vessel size for 860 species.]