Grasses are often synonymous with turf. Short plants that we can walk on.

But some grasses can grow to half the height of a redwood--50 m in height.

The physiological limits of tall height are often thought to reside in how a plant constructs its stems or leaves. Roots are important too, but mostly from an engineering perspective. They have to make sure the plant doesn't fall over.

Turns out there is another role for roots that is unique to tall plants. They have push water up to the top.

Usually, when we think of roots and water, the soil-plant-water continuum concept of water movement has roots as semi-passive straws. Their job is to come in contact with water so it can be sucked up to leaves through the xylem.

But when water in the xylem is under tension it can embolize, producing an air gap in the rope of water that extends from the soil to the leaves. The consequence? Water ceases to flow.

Poke a hole in a straw and try to suck soda, if you want to test this out.

What's a plant to do once xylem embolizes?

One approach is to grow new xylem and sacrifice the old. A lot of trees do this.

Grasses can't do this, so they need to dissolve the embolism. Like squeezing a bottle of soda to get the bubbles to go back in, this takes pressure.

How do some plants do this? Apparently, they close their stomata at night and let the roots start to pump up the pressure.

Because of the gravitational forces at work, a short plant doesn't require much force to pressurize the entire shoot. A tall plant requires more.

Showing this had never been done before, but Cao et al (2012)** tested this with bamboos.

**I'm apparently a few years slow in realizing how neat this paper is. 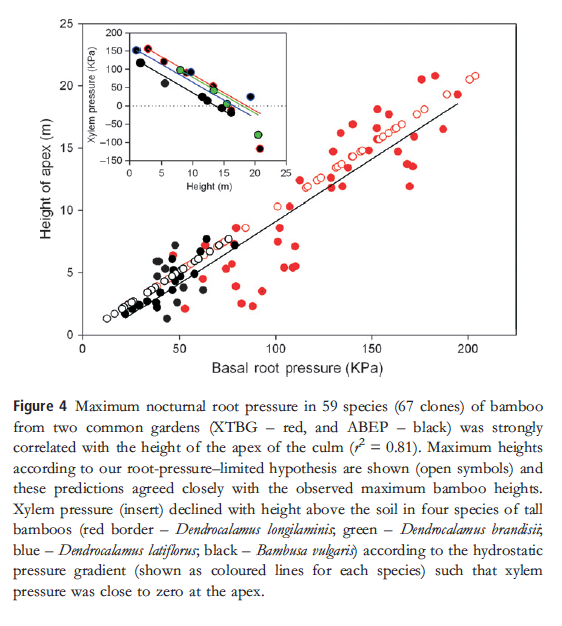 The work raises some interesting questions about the evolution of plants in general.

Can short grasses produce as much pressure as tall plants, but just don't? It takes energy to produce pressure, but there might also be adaptations that coordinate root and shoot function.

Also, for bamboos with stems, the point of growth is elevated off the ground. They don't grow from basal meristems. For cells to expand at the top of the plant, positive pressure is required. So, the root pressure should serve dual functions.

Also, since we tend to think of xylem as under tension, we worry about air leaking into xylem. But, xylem can also be under positive pressure. Are there unique adaptations to making sure that water doesn't leak out of xylem at the wrong place? Hydraulic lift is thought to be passive based on the relative negative water potentials of plants and soils, but when roots are pressurizing the whole system, can't that force water out of some roots?

None of this information is going to help create grasses that don't have to be mowed as often, but it sheds serious light into the evolution of height in plants (even grasses).