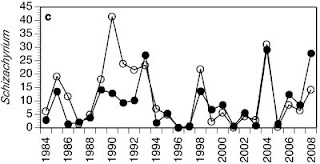 25-year record of flowering of Schizachyrium scoparium (open circles uplands, closed circles lowlands).
We’re just about ready to submit a paper that analyzes 25 years of flowering for three grass species at Konza. As far as I know, this is the longest continuous record of flowering effort for grasses (although there always seems to be some European record that dwarfs any North American record). In short, every fall, the number and weight of flowering culms for three species of grass (Andropogon gerardii, Sorghastrum nutans, and Schizachyrium scoparium) are measured in an annually burned watershed. The three species are, more or less, the three dominant grasses at Konza.

When I asked what people expected from the data, there were two main beliefs. First, species were offset in their flowering. It was generally held that some years were good flowering years for Andropogon, others for Sorghastrum. Second, flowering was much greater after a dry year, especially for Sorghastrum. The latter was likely an extension of the Birch effect, which I’ve talked about in previous posts.

The offsets in flowering are important components of understanding questions such as species coexistence, but it is the question about antecedent climates that tests our fundamental understanding of how grasslands work. At the heart of the matter is whether conditions during the previous year will generally affect current year’s dynamics. If so, processes like the Birch effect become more central and ecosystems become a lot more complex.

The conclusions seemed pretty straightforward, except for a short paper by Knapp and Hulbert in 1985. They had measured flowering in the same watershed as our dataset a few years before our dataset began. What was interesting was that flowering in 1981 was 6-10 times greater than any year of our 25 year record. 1981 was a sea of grass horse high not because 1981 was especially wet, but because 1980 was especially dry. A month where every day was over 100 degrees Celsius. Cows starving. Lawns dying.

As such, even though Konza had a 25-year record, some events happen rarely, and when they do, they can be spectacular. There are a lot of questions that are raised by the dataset. Was it the Birch effect that caused the immense flowering or reduced competition from plants dying? How dry to soils have to be for how long for N to explode? What really struck me was that no long-term dataset is ever long enough. 25 years of data just wasn’t long enough to capture even a hint of the importance of rare events. Who knows what year 26 will bring? I’m sure a lot of people will be watching a bit more closely.
Posted by JMC at 5:05 AM